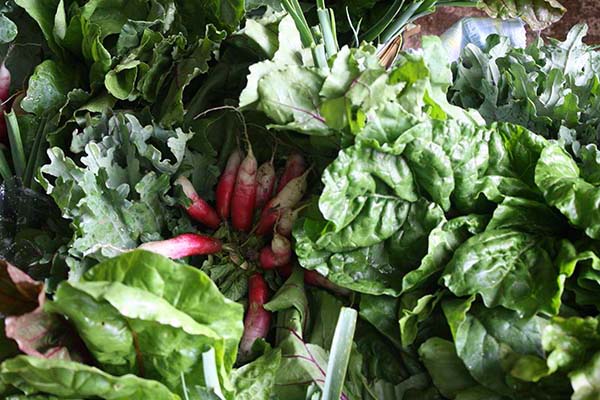 Dairy calcium isn’t doing your bones any favors. Here’s what you need to know about calcium.

After I’ve explained to people what vegans eat and that I do indeed consume plenty of protein, conversation can sometimes turn towards the topic of calcium. If I’m not drinking milk or eating cheese, I’ve probably bought myself a one-way ticket to osteoporosisville, right? Wrong! The idea that calcium can only be found in dairy products is a common myth here in the U.S. – one that’s probably been fueled by all of those pesky white moustache ads that have become so pervasive in our pop culture.

Studies have shown that cultures that don’t consume very much dairy have fewer occurrences of osteoporosis and hip fractures than those who consume mass quantities of it. A 12 year U.S. study conducted by Harvard looked at the milk intake of 78,000 women. Those who drank milk three times a day actually broke more bones than women who rarely drank any.

That doesn’t mean that people on a vegan diet don’t need to worry about their calcium intake at all, because we need just as much as everyone else, it just means that it’s not coming from a glass of thick, white liquid.

First we have to think about where calcium comes from.

If it comes from the food we consume, where does the cow get it? Is she drinking cows’ milk too? No, cows stop drinking mother’s milk when they’re about a year old. Cows, when living the way nature intended them to, primarily eat grass. Now I’m not saying you should run outside, mow your lawn, and then sit down to a heaping plate of grass clippings, but rather turn something similar that can easily be found at the grocery store: leafy greens.

The most nutritious sources for calcium are greens such as kale, broccoli, Brussels sprouts, collards, mustard greens and Swiss chard. They’re also packed with lost of other nutrients too. Why? Because minerals are actually found in soil. Greens pull minerals in through their roots and then disseminate them through their leaves. Beans are also loaded with calcium, as are foods like tofu, sesame seeds and sweet potatoes. The Recommended Dietary Allowances for calcium for adults is between 1,000 and 1,200 mg, and a cup of collard greens has about 350 mgs – or one third of the recommended amount. One cup of calcium-set tofu has about 500 mgs, 10 dried figs contains around 270 mgs and an English muffin has about 92 mgs of calcium, so you can see how it can quickly add up after a day of eating.

The tricky part isn’t really getting the calcium into the body, it’s holding on to it.

It’s important to exercise so that calcium has somewhere to go. Studies have shown that active people keep calcium in their bones, and that weight lifting can improve bone density. Adequate Vitamin D levels are also crucial, as it controls the body’s use of calcium. Most Americans are deficient in Vitamin D and don’t realize it. It’s a nutrient our bodies make from exposure to sunlight, and most of us need to supplement it. I always recommend that people get their blood tested for D and talk to their doctor about supplementing. Smoking, heavy salt intake and carbonated beverages can all cause calcium to be leached from our bones, so be careful with the salt shaker and opt for water instead of soda.

Another problem with cows’ milk is that it’s a common allergen.

If you have allergies, it will make things worse because it can cause the body to produce excess mucus. It’s also very common to be lactose intolerant. About 75% percent of the world’s population can’t properly digest lactose, which are the sugars found in milk. The reason is that humans are usually weaned off of mother’s milk around the age of 3, so the body’s production of lactase, the enzyme that breaks down lactose, starts to wane around the same time. Some believe that it was an accident of evolution that some humans began to continue to produce them into adulthood.

Humans are the only species that drink milk into adulthood.

We’re also the only species who drink milk from other animals. The mother’s milk of any species is suited to the specific needs of her babies. The biochemical composition of cows’ milk is perfectly suited to turn a newborn calf into a very, very large cow in a year. It can cause things to grow in humans too, such as waistlines and tumors, as studies have shown that the intake of dairy products has been linked to certain cancers such as ovarian cancer and prostate cancer.

There’s a reason for that. Mother’s milk contains certain chemicals that act as opiates in the brain of the their babies. This creates the mother-baby bond, and it keeps babies from straying too far from their mothers in the wild. Humans barely notice it when drinking a glass of milk, but it’s very present in cheese. The chemicals are known as casomorphins, and it’s not an accident that word “morphine” is in there. Just as mother’s milk as an opioid effect on the brain of the baby, cheese can act like a drug in humans. Cheese addiction is a very real thing.

So there you have everything you always wanted to know about calcium and dairy products but were afraid to ask! And before you ask me about goats’ milk, I must ask you – are you a baby goat?

Dianne Wenz is the Editor-In-Chief for Chic Vegan. She is a Holistic Health Counselor, Vegan Lifestyle Coach and Plant-Based Nutrition Specialist. Dianne coaches people from across the country to help them improve their health and wellbeing, and she helps people make the dietary and lifestyle changes needed to go vegan. Dianne lives in New Jersey, where she runs the busy MeetUp group Montclair Vegans. Through the group she hosts monthly potlucks, runs charity bake sales and organizers guest speaker events. An avid cook and baker, Dianne also teaches cooking classes to local clients. In addition to food and nutrition, Dianne loves crafts and cats. To learn more, visit Dianne’s website and blog at VeggieGirl.com.

This article was republished with permission from Chic Vegan; photo by Becky Striepe.