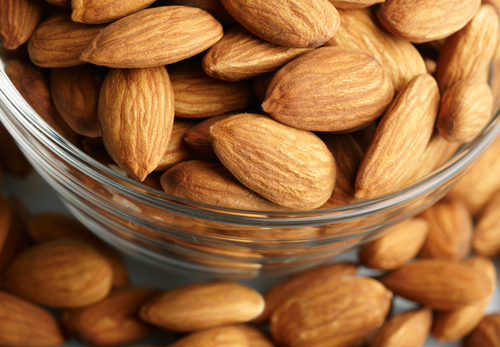 Many common foods and even dietary supplements contain low levels of naturally occurring cyanide. Should we limit these foods and cut out these supplements?

The short answer: not really.

We’ve talked about arsenic in apple juice, but lately I’ve been seeing folks fretting some about cyanide in food and in dietary supplements. Foods like almonds, spinach, and lima beans contain low levels of a cyanide compound, and there’s a type of vitamin B12 supplement that contains cyanide as well. In large doses, cyanide is a dangerous poison that deprives our body’s cells of oxygen and can cause death.

When you’re talking about a dangerous dose of cyanide, it generally means between 50 and 200 mg of hydrogen cyanide. So, which foods contain cyanide, and is it an issue?

Cyanide occurs naturally in food, and it’s totally normal for humans to ingest small amounts of it each day. Our bodies can handle cyanide in low doses. It’s when you hit that 50-200mg level that things can get worrisome. If almonds and spinach were deadly, we wouldn’t eat them, right? Here are some common foods that contain cyanide:

Cyanide is much more dangerous when it’s inhaled than ingested. Smoke, for example, contains high levels of cyanide. When it comes to fruits, veggies, grains, and legumes, you don’t really need to fret about cyanide. Just don’t eat those tempting peach pits!

Cyanide in B12 Supplements

What do you guys think? Do you worry about cyanide in your B12 supplements or in the food you eat?