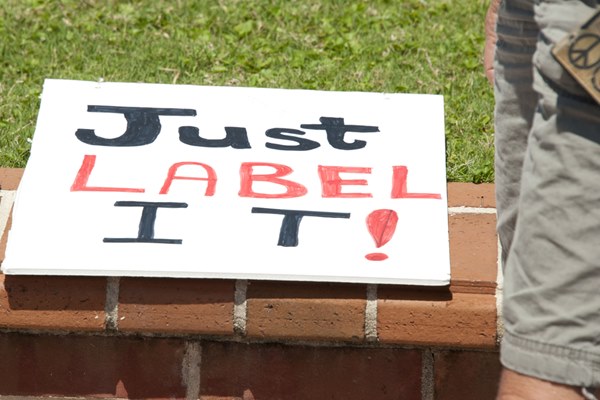 Governor Dannel Malloy made history Wednesday by signing the first U.S. GMO labeling bill into law. There’s a hurdle or two still to clear, before the law can take effect; but CT just won the Best In Show (So Far) prize, in the ever-escalating race for increased U.S. regulation of genetically modified foods. Well done, Connecticut!

Malloy hosted the bill-signing ceremony yesterday in front of Catch A Healthy Habit organic cafe in Fairfield, CT. The bill passed last June, and now represents the first successful state effort to pass legislation requiring foods made wholly or partly with genetically modified ingredients to be accurately labeled as such.

The new labeling law won’t go into effect unless certain conditions are met by other states.

‘The Connecticut bill requires at least four other Northeastern  states with a combined population of no fewer than 20 million to  approve similar acts before it can officially go on the books.  And while so far proponents of a GMO labeling initiative have  found allies in one adjacent state, it could very well be a  long-time coming before the proper support is rallied.

Voters in Maine have already elected to pass a near-identical  measure, but residents in a region that includes Massachusetts,  New Hampshire, New Jersey, New York, Rhode Island and Vermont  must come together to do the same in at least three other  locales.’

The law isn’t the one I would have written, had I been asked to do so. But it’s a giant step in the right direction! And it’s more than anyone has managed to do so far to break free of the biotech industry’s stranglehold on our collective regulatory windpipe, when it comes to GMOs in our food supply.

If you’re new to the issue and not sure why GMO labeling is such a humongous deal, read:

“This is a beginning, and I want to be clear what it is a beginning of,” Malloy said, before putting pen to paper. “It is a national movement that will require (food) labeling.”

Malloy said residents must speak up when they go to food stores and are unable to find detailed lableing of food ingredients. “This is the time,” he said. “You better get ready; people are coming and this is not a movement you are going to stop.”

“We have a lot of gratitude here today,” said [director of GMO Free CT, Tara Cook-Littman]. “This is really monumental.”

So… who’s next? Calling all other Northeastern states: GAME ON, and BATTER UP!