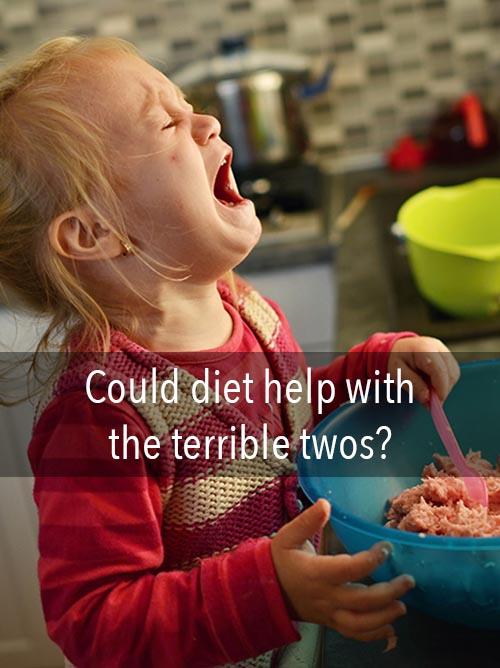 Your toddler’s gut flora may be contributing to some of that terrible twos behavior, according to new research published in the journal Brain, Behavior, and Immunity.

My son turned two in March, and the terrible twos are no joke. I think we are getting off relatively easy with our kid, but helping a toddler deal with a storm of new, confusing emotions is really hard some days. So when I saw this release about an Ohio State University study linking gut bacteria and how toddlers manage stress, I was very intrigued.

The study authors stress that they aren’t looking to beat the terrible twos. Instead, they are trying to find early indicators of chronic disease. They think that gut bacteria impacts how our bodies produce and handle stress hormones, even in kids as young as 18 months. And that interaction means that a young child’s diet may also impact his temperament.

Will a daily cup of yogurt of kombucha turn the terrible twos into smooth sailing? Probably not. And the researchers say we shouldn’t monkey with our kids’ gut flora too much just yet. But I’m sure going to add some coconut yogurt to my kid’s morning smoothie!

You can read the full press release from the study authors below.

The next time your toddler acts adventurous, shy, fidgety or cuddly, you might be able to blame the bacteria in his gut.

Researchers from The Ohio State University studied microbes from the gastrointestinal tracts of children between the age of 18 and 27 months, and found that the abundance and diversity of certain bacterial species appear to impact behavior, particularly among boys. The correlation exists even after the scientists factored in history of breastfeeding, diet and the method of childbirth – all of which are known to influence the type of microbes that populate a child’s gut.

Study authors say they aren’t looking for a way to help parents modify the ‘terrible twos,’ but for clues about how – and where – chronic illnesses like obesity, asthma, allergies and bowel disease start.

“There is substantial evidence that intestinal bacteria interact with stress hormones– the same hormones that have been implicated in chronic illnesses like obesity and asthma,” said Lisa Christian, PhD, a researcher with Ohio State’s Institute for Behavioral Medicine Research. “A toddler’s temperament gives us a good idea of how they react to stress. This information combined with an analysis of their gut microbiome could ultimately help us identify opportunities to prevent chronic health issues earlier.”

Christian and study co-author, microbiologist Michael Bailey, PhD, studied stool samples from 77 girls and boys, and found that children with the most genetically diverse types of gut bacteria more frequently exhibited behaviors related with positive mood, curiosity, sociability and impulsivity. In boys only, researchers reported that extroverted personality traits were associated with the abundances of microbes from the Rikenellaceae and Ruminococcaceae families and Dialister and Parabacteroides genera.

“There is definitely communication between bacteria in the gut and the brain, but we don’t know which one starts the conversation,” said Dr. Bailey, who is currently a researcher with Nationwide Children’s Hospital and a member of Ohio State’s Institute for Behavioral Medicine Research. “Maybe kids who are more outgoing have fewer stress hormones impacting their gut than shy kids. Or maybe the bacteria are helping mitigate the production of stress hormones when the child encounters something new. It could be a combination of both.”

Overall, associations of temperament with the gut microbiome in girls were fewer and less consistent than boys. However, in girls, behaviors like self-restraint, cuddliness and focused attention were associated with a lower diversity of gut bacteria, while girls with an abundance of Rikenellaceae appeared to experience more fear than girls with a more balanced diversity of microbes.

To identify correlations between gut bacteria and temperament, researchers asked mothers to assess kid’s behavior using a questionnaire which measures 18 different traits that feed into three composite scales of emotional reactivity: Negative Affect, Surgency/Extraversion and Effortful Control. Scientists looked at the different genetic types and relative quantity of bacteria found in the toddler’s stool samples along with their diets.

The average gastrointestinal tract contains 400-500 different species of bacteria, and most of them belong to one of ten phyla of bacteria. Advancements in DNA-based methods have allowed scientists to identify bacteria in stool, along with the relative concentration of those bacteria – giving them a much more accurate look at the diversity and composition of the microbial community.

“In the past, bacteria were cultured from samples in the lab, and scientists assumed that what grew was an accurate reflection of what was in the gut,” said Dr. Bailey. “Now we can see that’s not the case. All of the predominant bacteria that we found in our study have been previously linked to either changes in behavior or immune response, so I think we are definitely on the right track.”

Similar to other child behavior studies, researchers separated their findings by gender to analyze temperament. Overall, the study found few differences in the abundance and types of gut microbiota between girls and boys.

While scientists believe that the microbiome is generally set by the age of two, there are dramatic changes in gut microbes that take place during and after birth, as babies pick up bacteria from their mothers during labor and through breastfeeding. Babies born via C-section will have different microbes than babies delivered vaginally.

However, the researchers found that gut bacterial composition wasn’t impacted by delivery method, diet or length of breast feeding. The authors acknowledge that their study didn’t delve deeply into individual diets, but looked generally at when food types were introduced and the types and frequency of food consumed daily.

“In this study, the associations between temperament and the gut microbiome that we saw weren’t due to differences in the diets of children. However, it is possible that effects of diet would emerge if we used a more detailed assessment. It is certainly possible that the types or quantities of food that children with different temperaments choose to eat affect their microbiome.” said Dr. Christian, who also holds appointments in the departments of psychiatry, psychology and obstetrics/gynecology at Ohio State’s College of Medicine.

Both researchers say that parents shouldn’t try to change their child’s gut microbiome just yet. Scientists still don’t know what a healthy combination looks like, or what might influence its development.

“The bacterial community in my gut is going to look different than yours – but we are both healthy. The perfect microbiome will probably vary from person to person,” said Dr. Bailey.

Drs. Christian and Bailey are continuing to study how the gut microbiome impacts human health and behavior, recently publishing evidence that the babies of obese mothers have a different gut microbiome than babies of normal weight mothers. They are currently applying for an R01 grant to determine how this difference may predispose babies for developing obesity later in childhood.