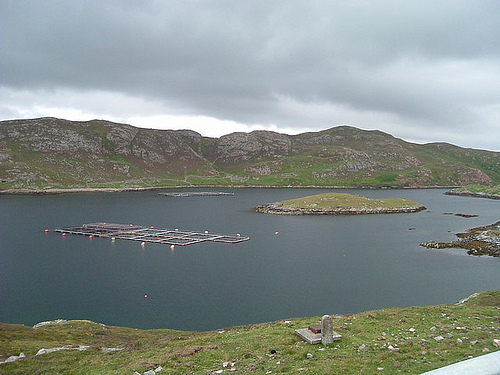 Four thousand Scottish salmon escaped from Loch Duart Salmon Farm in Scotland. If ordinary salmon can escape a farm, why can’t GM salmon? Silly question. Of course GM salmon will be able to escape into the wild.

Loch Duart Salmon Farm is a sustainable salmon farm on the northwest coast of Scotland. They raise Scottish salmon for sale to restaurants and shops around the world.

They’ve been recognized for their environmental policies by ISO 14001, which means they take steps to minimize their impact on the environment and they comply with local and national legislation. The fish are not given antibiotics. The sites where the fish are kept are rotated, leaving each site a full year to recover – much like traditional land farming of sheep or cattle.

Loch Duart Salmon Farm has also been recognized for their animal welfare policies by Freedom Food, the RSPCA’s farm animal assurance and food labeling division. They check the farm to be sure the salmon have adequate space, food, and that the fish are behaving naturally. Fish don’t need toys or pats the way dogs and cats do, but when they’re under stress, they exhibit some strange behaviors.

Finally, the farm is owned and managed by Scots and keeps employment in the local community. If all salmon farms were run like this one, salmon farming would have a good reputation.

Even so, accidents do happen. On November 9, 2010, four thousand salmon got out of their pen and headed into the open ocean. The company has apologized for the accident, and it’s easy to believe them. A lot of money swam away that day and they’ll do their best to make sure it never happens again.

Compare that with AquaBounty’s claim (and the FDA’s implicit agreement) that their GM salmon, AquAdvantage, will never escape. Never? Other salmon farms can’t guarantee that, even though it cuts into their bottom line. What makes AquaBounty different? Nothing. They’ll apologize when the AquAdvantage salmon escapes, but the GM salmon will already be out.

One promise that AquaBounty makes is that they’ll raise their salmon in land-based pens. It’s more expensive to raise salmon on land, which is why most operations are in the ocean.

I briefly mentioned in a previous article about AquAdvantage salmon that the salmon will be raised in Panama. Once the GM salmon are approved for consumption in the U.S., it will be very tempting to increase the profit margin by moving the pens into the ocean. At that point, it would be up to the government in Panama – or another country, if it’s more advantageous to the business plan – to decide if that’s okay.

In the U.S., it’s already illegal to farm GM fish offshore. But other countries might not have the same concerns. Local employment, fees from the farming operation, the potential to attract more fish farms (and more employment and fees) could sway any government into short-term thinking.

We could say no to buying it, but the AquAdvantage salmon would already be approved for U.S. consumption. They would be unlabeled, thus impossible to refuse to buy without boycotting the entire salmon industry.

Comments on the FDA’s proposal to not label the GM salmon are due by November 22. With only four more days to act, what can we do?

Representative Donald Young of Alaska submitted H.R. 6265, the purpose of which is “to amend the Federal Food, Drug, and Cosmetic Act to prevent the approval of genetically-engineered fish”. Senator Mark Begich, also of Alaska, has introduced a similar bill to the senate.

If those two bills fail to pass, Rep. Young has submitted H.R. 6264, “to amend the Federal Food, Drug, and Cosmetic Act to require labeling of genetically-engineered fish”. Sen. Begich has introduced a similar bill.

Advantages and Disadvantages of AquAdvantage over Wild Salmon

It’s no surprise that legislators from Alaska are teaming up to stop the GM salmon. The AquAdvantage salmon would have one advantage and three disadvantage in the wild which would work together to cause wild salmon to go extinct, thus destroying Alaska’s (and other states’) salmon fisheries.

Advantage: The AquAdvantage salmon grows faster than ordinary salmon. This makes them attractive mating partners for the wild salmon. Keep in mind that the sterilization process the AquaBounty will use on their fish is not 100% effective. About 5% of the AquAdvantage salmon will be able to reproduce.

Disadvantage: The AquAdvantage salmon needs more food than the wild salmon to sustain its growth rate. They would consume available food supplies, depleting resources in the area and competing with the wild salmon.

Disadvantage: The AquAdvantage salmon is easier for predators to catch. They just don’t seem to evade predation the way wild salmon instinctively do.

Disadvantage: The AquAdvantage salmon does not form schools as readily. This is very similar to the preceding disadvantage, in that it makes them easier to prey on. But it also means they’ll move between schools of salmon more readily, mixing more with the wild population.

In short, the AquAdvantage salmon will look more fit to the wild salmon, who will then prefer to breed with the GM salmon. However, the offspring will eat more than the ecosystem can provide and be easier to catch by other predators. It won’t take many generations before the population levels drop below critical numbers and the salmon, both GM and natural, go extinct in the wild.

Contact your senators and representatives to let them know what you think of the GM salmon.