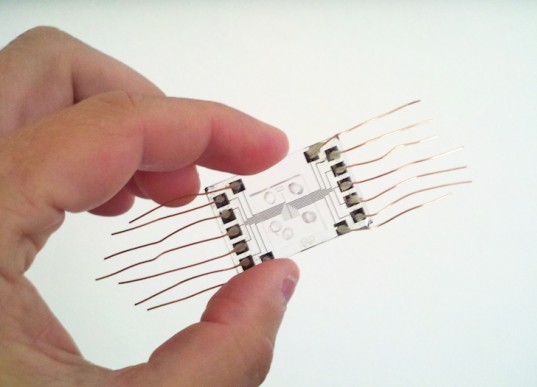 With water shortages impacting populations worldwide, finding portable, affordable ways to produce clean drinking water is more important than ever. A new desalinization chip could be part of the solution.

Researchers from the University of Texas at Austin and the University of Marburg in Germany are working on a nanoscale desalinization chip that operates on just 3 volts of current and is so small, it can be used anywhere. It can even be powered from a car battery. The “water chip” creates a small electrical field that separates salt from seawater, according to Inhabitat.

The researchers apply a 3.0 volt electrical charge to the plastic water chip, which has a microchannel with two branches. By creating an “ion depletion zone” with an embedded electrode that neutralizes chloride ions, they are able to redirect the salts in the water down one channel, while the fresh water goes down another.

“Like a troll at the foot of the bridge, the ion depletion zone prevents salt from passing through, resulting in the production of freshwater,” the team wrote in a recent press release.

Fresh drinking water is on the minds of many right now, as the three year long drought in California intensifies. People look out at the Pacific Ocean right next door and wonder why it isn’t possible to get fresh water from the sea.

Technically, it is possible, but the cost of a commercial scale desalinization plants can be millions of dollars. With the “water chip,” people may someday be able to have enough clean water for a village at minimal cost.

The researchers have created a small startup company called Okeanos Technologies to continue developing the technology. Its head, Tony Frudakis, says, “You could build a disaster relief array or a municipal-scale unit. Okeanos has even thought about building a small system that would look like a Coke machine and operate in stand alone mode to produce enough water for a small village.”

Currently the technology purifies just one nanoliter of water at a time and only has a 25% efficiency rate, but the team is confident that their proof of concept will be improved and then scaled up. If successful, they will have met one of the looming challenges of global climate change.

Republished with permission from Planetsave.