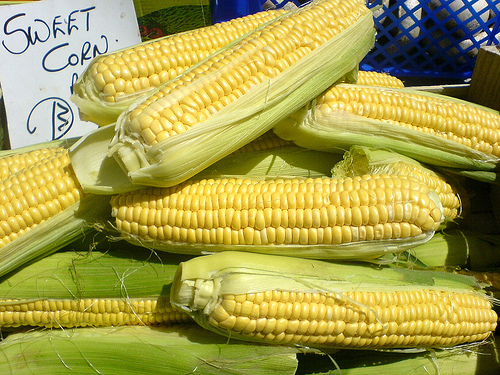 For those of us with corn allergies, it’s not just the corn-on-the-cob and the hush-puppies that are the problem, thank you very much.  No, it’s the vitamin D in fortified milk, the food-grade wax coating fresh produce, the dextrose mixed into iodized salt, the citric acid used to rinse loose greens and baby carrots, and the cornstarch filler in baking powder. A friend of mine used to joke that I couldn’t even drink water, and that’s not far-fetched.  If you’ve taken a sip from a bottle of mineral-enhanced water recently, you’ve swallowed corn.

Since corn isn’t recognized as a Top 8 Allergen, its presence in a product isn’t indicated on the allergy warning label. Even a careful read of the ingredients list doesn’t do a whole lot to quell a corn-allergy sufferer’s fear, as corn is often hidden in innocent-sounding ingredients such as vitamin E, vegetable oil, and of course, natural flavors. And that’s not even mentioning the packaging, which is increasingly corn-based.

Even the best organic food is not exempt from the curse.  Corn is in the adhesive which holds fair-trade tea bags together, and in the citric acid added to organic applesauce.  It’s in the soaker pad under that cut of beef, and in packets of yeast disguised as ascorbic acid.

So what’s the solution when going organic isn’t enough?  If there is one thing my corn allergy has taught me, it’s that remaining passive about food production and consumption is not only irresponsible, it’s actually detrimental to my health.  Necessity demands a proactive approach.  I need to take charge of my food consumption, contact food growers and producers, and know exactly what has touched my food before I put it in my mouth.

And, food allergies or not, shouldn’t that be the norm for all of us?

Image via Gaetan Lee on Flickr via a Creative Commons License