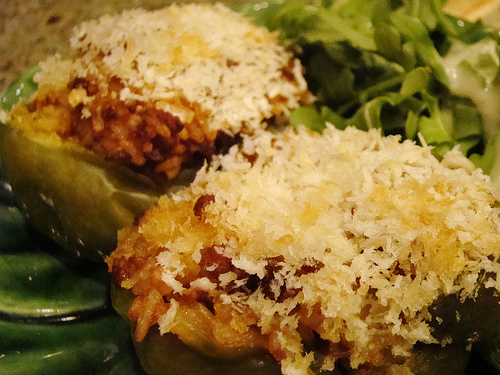 The short (less than five minutes) cooking shows are hosted by Chef Vic, a vegetarian who makes much of his past as a wild man. He goes on to say that, while he gave up most of his crazy ways when he became a family man, he is still a biker and a rock musician. He decided to give up meat so that he could keep his heart healthy and watch his kid grow up.

Assisted by his mom, Linda, or his wife, Marian, Chef Vic shows how to make quick vegetarian meals with meat substitutes. The banter with his co-hosts is pretty cute. They add health tips and his mother reminds him to wash his hands. One thing they mention is that you don’t have to worry about undercooking your meat substitutes and with so many recalls going on, that’s one less thing to worry about.

Vegan substitutes for some of the ingredients are included for each recipe.

Yves Veggie Cuisine sponsors the shows to celebrate their 25th anniversary, so the meat substitutes are all Yves brand. The recipes would work with any brand, though.