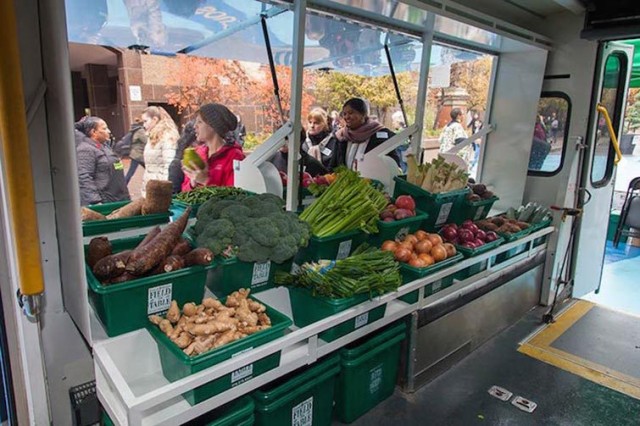 Two programs — one in St. Louis and one in Toronto — are trying to alleviate the effects of food deserts on local residents by bringing them the fresh, wholesome food they need most. A food desert is a neighborhood with few supermarkets. It may teem with fast food restaurants and convenience stores selling cigarettes, candy, and pre-packaged snack foods, but the residents have little access to fresh fruits, vegetables, and meat. Food deserts tend to occur in a city’s poorest neighborhoods.

Two programs — one in St. Louis and one in Toronto — are trying to alleviate the effects of food deserts on local residents by bringing them the fresh, wholesome food they need most. In both cases, the programs use converted buses to access the affected neighborhoods. In St. Louis, a grant from the Incarnate Word Foundation allowed three entrepreneurs to buy and convert a former Metro bus. The three founders are Washington University graduates Colin Dowling and Tej Azad and Saint Louis University medical student Jeremy Goss. Their project has been in the planning stages for 5 years. Today, the their bus is called the St Louis MetroMarket.

St. Louis public radio reports the mobile farmers’ market is designed to combat the health problems associated with food deserts by bringing fresh produce, fish, meat, and other staples to low income areas that don’t have grocery stores. The food will be sold on a sliding pay scale.

Volunteers show local residents how to prepare the food they purchase from the St. Louis MetroMarket and turn it into delicious and nutritious food for themselves and their families. In exchange for monetary support, MetroMarket will visit the hospitals once a week, giving staff easy access to local food. Pediatric patients at the hospitals will get a discount on the food they purchase thanks to “food prescriptions” provided by the medical staff.

In Toronto, the Mobile Good Food Market also operates from a converted bus. Funded by FoodShare Toronto, the city of Toronto, and United Way Toronto, it brings fresh vegetables and greens to inner city neighborhoods twice a week. On board is everything from broccoli and lettuce, to apples and onions.  Other fruits and vegetables are also available, according to GoodsHomeDesign.com.

It is disheartening to think that many Americans do not have access to wholesome food choices but uplifting to know some community members are taking steps to bring nutritious food options to those who need them most.