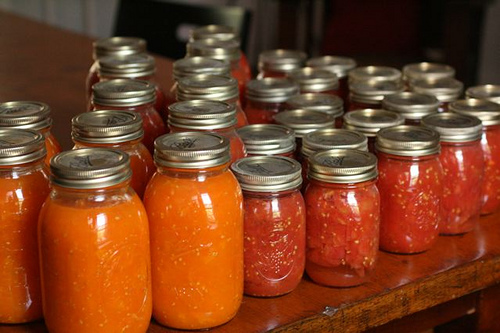 This should not be very surprising…

A new study shows that consuming canned soup increases the amount of bisphenol-A (BPA) in the body compared to consuming freshly made soup. BPA is the endocrine-disrupting chemical that leaches into food and drink from certain plastics, such as well-known example Nalgene bottles.

The study was performed by the Harvard School of Public Health, and the results were published in the Journal of the American Medical Association.

Why are cans lined with BPA in the first place?

Cans are lined with BPA to prevent corrosion of the metal cans. BPA does a really good job at this, and it has many desirable properties for canning food. It is resistant to the high heat used and is flexible so that it doesn’t break or crack if the can is bent.

Unfortunately, it can leach into the food it is protecting, particularly into acidic foods such as tomatoes.

There are alternatives to BPA, though their effectiveness is not as great. More on this later…

After the initial run, the group were given a two day break to rid their bodies of possible BPA, and the groups swapped soups.

The urine samples of the volunteers (I wonder if they used these fish to detect BPA???) taken during the testing showed eating a daily serving of canned soup daily correlated with over a 1,000%  increase in BPA compared to those who consumed fresh soup.

The study highlights that those who consume canned foods or beverages daily may be exposing themselves to higher levels of BPA than those who eat a fresher diet. It also highlights the importance that manufactures looks to alternatives to BPA.

The obvious way to avoid BPA from canned goods is to consume more fresh foods. This of course is easier said than done as fresh foods are not available to everyone at all times (either due to geographical or economical considerations), and they can be less convenient.

Frozen foods are a great alternative to canned goods.

Other ways to reduce BPA from canned goods is to look for BPA-free cans. Also, jarred goods can reduce the amount of BPA, though these typically have a metal lid lined with BPA; however, there is much much less BPA surface area to come in contact with the food, and so reduces leaching opportunities.

Here are some suggestions for BPA-free tomatoes and some general suggestions on avoiding BPA.

For further reading, here’s a link to a guide about plastic-free cooking and food storage.

Here are some fresh soups to try if you are looking to kick the can: