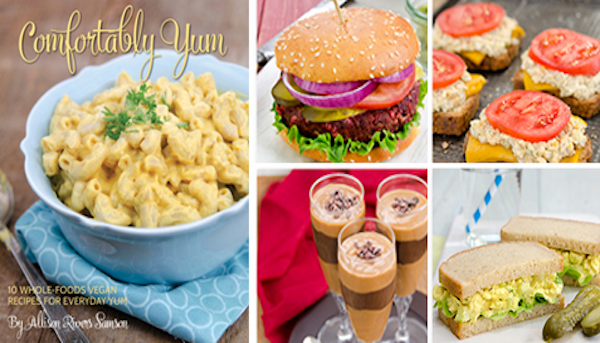 If you’ve been a vegan for any number of years, you may be doing quite a few head turns lately. All of a sudden, the vegan diet is popular with former presidents and vice presidents. With heavyweight champions and Olympic gold-medal winners. It’s the on-and-off again diet du jour for Beyoncé. We’ve certainly come a long way from the good ol’ days where we considered ourselves lucky if we could find tofu, let alone a vegan cookbook with recipes on how to cook it.

Oh, how things have changed.

For one, since I started eating a vegan diet (back when dinosaurs roamed the earth), we now have this little thing called the Internet, where we basically have access to every vegan recipe ever. Which is pretty cool. And most often, exhausting.

It’s why cookbooks make sense, of course. And good news on the vegan cookbook front! For VegNews subscribers, you may already be familiar with Allison Rivers Samson, the former recipe columnist for “Veganize It.” She’s also the founder/visionary baker at Allison’s Vegan Gourmet (home of the best vegan chocolate truffles on earth). To say she knows her way around the kitchen is an understatement.

Her first cookbook (ebook), “Comfortably Yum” lives up to its name. Samson is the queen of vegan indulgence both sweet and savory, and comfort foods get all the love here. Her recipe for Magic Mac ‘N Cheese is so delicious you’ll hardly believe it’s good for you. It’s perfect comfort food for these grueling winter months (hey, it’s a frigid 58 degrees in LA!). It’s also a delicious way to introduce skeptics to the vegan diet.

You’ll melt over the Open-Faced (Save the) Tuna Melts with a homemade cheese slice that actually melts. And actually tastes amazing. No preservatives. No carrageenan. Just real foods you can pronounce, and taste. So good. It’s a new favorite in my house.

Samson takes veggie burgers to another level with her creative and truly yummy recipe for Beet Burgers, and the old classic Vegan Egg Salad stands up to any egg and mayonnaise version. But you know, without the eggs or mayonnaise (or cruelty).

What’s also really special about this collection is Samson’s recommended shopping list and kitchen tools. If you’re new to cooking—vegan or otherwise—navigating pantry items can be totally overwhelming. It’s really helpful to have some guidance here.

With only ten recipes in “Comfortably Yum” you’ll feel relatively accomplished in working your way through them all quickly, but you’ll be drooling for more. Good thing you can check out her weekly blog “Monday Yumdays” for more tasty and comforting recipes. Hopefully they’re the beginnings of yet another book. But until then, you can get plenty of miles out of these recipes. I know in my kitchen they’re sure to be in heavy rotation for quite a while.

Check the book out here.