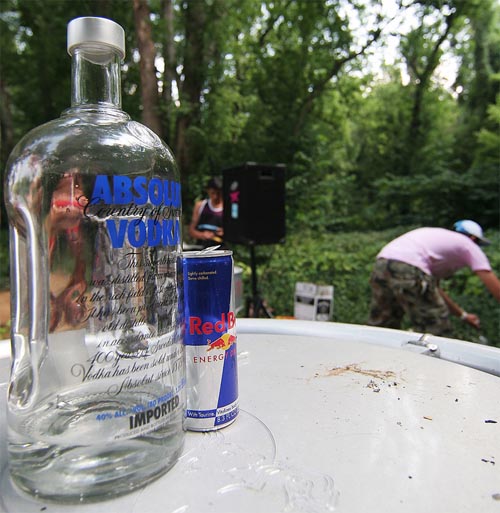 Obviously, neither alcohol nor caffeine is healthy for you in large doses.  But is combining alcohol and caffeine really worse for you than alcohol or caffeine on their own?  The media seems to portray it as an evil concoction…but come on, people have been consuming caffeine and alcohol forever.  Ever heard of a Jack and Coke?

The problem perhaps lies in the way these drinks are marketed rather than in the drinks themselves.  They seem to be marketed to younger, inexperienced drinkers, and somewhat underhandedly to underage people through brand recognition.  The drinks containing alcohol look very much like the familiar energy drinks containing no alcohol.

It also seems that these drinks are marketed by their alcohol content, which leads me to believe they are targeting young people.  Some have almost 10% alcohol, which is somewhere in between typical beer and wine, and this fact is very clearly and repeated labelled on the packing.   That’s quite a bit for something that probably goes down quite quickly.

For a young drinker with little money, more alcohol percentage for the buck sounds like a good idea.  What adult of drinking age cares how much alcohol is in a drink?  I can’t remember the last time I even looked…

Are they actually bad for you?

Some people have reported that you can’t taste the alcohol in it or that the caffeine makes you feel less drunk than you actually are, so you can drink a lot of these drinks before you have realized that you drank too much.  I see that this can be an issue for inexperienced drinks, but if you get a really good girly martini, you have no idea that you’ve just down over 4 oz of alcohol.  It really comes down to the fact that inexperienced drinkers don’t know how to drink.

These drinks have been banned at some universities because they are being blamed for sending people to the emergency room with alcohol poisoning.  This always seems to be the over-reaction.  Someone did something stupid, so let’s blame the product.  I don’t agree with the underhanded marketing to underage people, but where is the personal responsibility?  People drink themselves stupid all of the time, with many different substances.

My consensus is that, for adults, these drinks are not inherently more dangerous than any other alcoholic drink.  The problem lies with marketing to young, inexperienced drinkers.  It seems wrong.  Teenagers don’t need other influences to do stupid things…their underdeveloped frontal cortexes and peers are enough.  The effects of caffeine and alcohol on young people may be more exaggerated than on adults, so they could potentially be bad for young people..but still, is the combination actually worse then caffeine and alcohol on their own?  This is under research.

I’m not trying to promote underage drinking, but the only way to learn how to drink responsibly is by drinking.   Inexperienced drinkers will make mistakes with alcohol no matter what they are consuming.