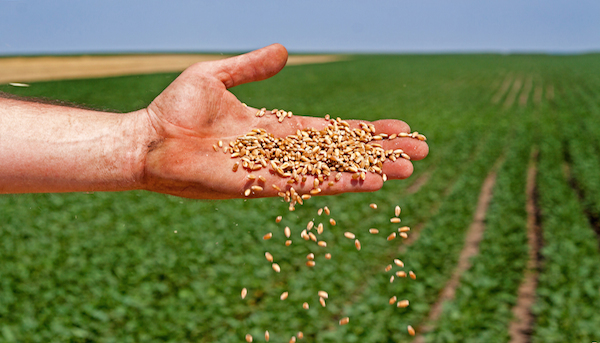 Just as the White House has released its massive climate change report, a new study out of Harvard’s School of Public Health finds that rising global temperatures are also going to make our food less nutritious.

“In the future, Earth’s atmosphere is likely to include a whole lot more carbon dioxide,”

explains NPR’s The Salt. “Now, scientists are reporting that some of the world’s most important crops contain fewer crucial nutrients when they grow in such an environment.”

Current levels of carbon dioxide in the air are at 400 ppm—the highest in recorded history. As the levels surpass 500 ppm, crops may fail to be as nutritious, found experiments conducted by Harvard researchers on rice, wheat, peas and other crops. The findings were published in the recent edition of the journal Nature.

The experiments take place in open fields, “except that in the field are placed rings of carbon dioxide jets,” Samuel Myers, a researcher at Harvard’s School of Public Health, told The Salt. The amount of carbon dioxide released by the jets simulated the atmosphere expected in 40 to 60 years.

“In general, the experiments show that crops grow faster when there’s more carbon dioxide, and yields are often 10 percent higher, compared with plants in normal atmosphere,” reports The Salt. “But Myers and his colleagues took a closer look, examining not just the quantity of the harvest, but also its quality.”

“What we found were 5 to 10 percent reductions in nutrients like iron, zinc and protein,” he told The Salt. While unsure of what’s causing the depleted nutrients, one theory is that the more grains or beans a plant produces, the more diluted the nutrients become. But if we can’t remedy the climate situation, the effects on our diet could be detrimental.

“Worldwide, about 2 billion people already are getting too little iron and zinc in their diets, and it’s damaging their health,” The Salt explains. “Zinc deficiency causes increased child mortality due to infectious diseases, because it prevents the immune system from working properly. Lack of iron increases the death rates of mothers and lowers the IQ of children.”

Assuming we can’t fix our global warming problem quickly enough, a diverse diet could be the answer to filling nutritional voids. “An international effort called is trying to create new crop varieties, through plant breeding, that contain higher levels of these nutrients,” The Salt explains. “The initiative has succeeded in creating lines of rice and wheat that are high in zinc.”

But there are still challenges, like getting diverse crops to grow on a warmer planet. Many foods are being threatened by climate change: wheat, coffee, chocolate and avocadoes are just a few facing the challenges of global warming. (So are fish stocks and livestock, if you consider animals food). If the number of foods that can grow continues to decline, the nutritional quality of foods may not matter nearly as much as the sheer availability.