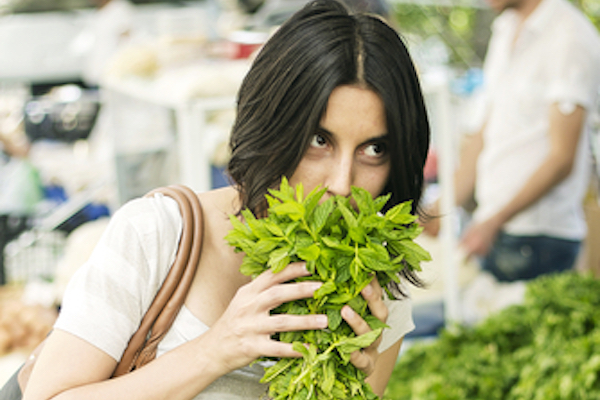 Cilantro. People love it or they hate it. Vehemently. People who think cilantro tastes like soap — or the smell of bug spray, stinkbugs, or a musty basement — seriously want to eradicate it from the face of the earth.

I had no idea how serious these cilantro haters are.

Insidious leaf
I detect you in smallest
Of small quantities

– haiku from Brookereiko on I Hate Cilantro

Malodorous weed!
A vagrant’s armpit would be
More appetizing.

– haiku from Britishmutt on I Hate Cilantro

Even Julia Child detested the herb telling Larry King it had a “dead taste” to her and saying if it arrived on her plate: “I would pick it out if I saw it and throw it on the floor.”

But It’s Not Their Fault

There’s a scientific reason for all that loathing: 10% of the population was born with a genetic defect variant. Researchers looked at the genetics of about 14,000 people and found a DNA variation believed to be the root cause of the soapy smell and taste some people associate with cilantro.

For those who don’t recall your high school biology, DNA is made up of building blocks called nucleotides. There are four of them: adenine, thymine, cytosine, and guanine — A, T, C, and G. And there’s this thing called a single-nucleotide polymorphism — or SNP, pronounced “snip”. A SNP is a DNA sequence variation within a population in which a single nucleotide — A, T, C, or G — differs.

One of these variations (SNP Rs72921001 to be specific) causes some people to think cilantro tastes like soap. Not surprisingly, this SNP sits near a specific olfactory receptor gene (OR6A2 to be exact) — the one that tells our brain we are smelling cilantro.

A post on Reason I am here describes the science in more detail. The author explains:

If you are among the 10% of humans who have a C instead of an A in that location, when confronted with cilantro, instead of the misleading “gee, I smell cilantro, lalala, happiness,” your brain will warn you of the real danger you face: “I smell the disgusting herb that poisons everything good and loveworthy in this world. Run for your life!”

(Apologies to my high school biology teacher, Mrs. Jackson, for any errors in my rudimentary explanation of this science.)

For the Rest of Us

I guess I have an A in my SNP, because I love cilantro. Its crisp freshness is the perfect accent to chile, tacos, or my favorite slow cooker tomatillo pork braise. Apparently my writing buddies feel the same way because we’ve shared a slew of recipes featuring the herb.

If you want to show cilantro your love, here are a few recipes featuring the delightfully aromatic, crunchy, delicious ingredient.

And of course, a Cocktail

Which side of this debate are you on?