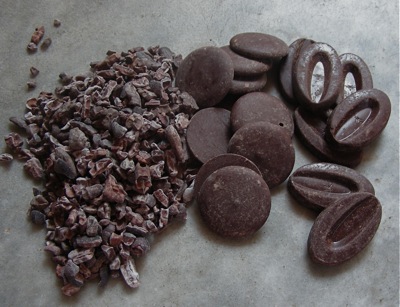 The biological properties of cocoa are widely misunderstood.  A Science News article has recently reported that chocolate needs to be looked at in a new light.

According to the article, consumers have treated dark chocolate as a good source of  the antioxidant flavonoids that appear to reduce blood pressure and perhaps protect people from dangerous blood clots.

The National Academy of Sciences in Washington, D.C., held a Cocoa Symposium in June this year that brought up findings that dark chocolates retain very little flavonoids, like epicatechin, specifically.

The good part of the news is that chocolate making can be modified to enhance their flavonoid concentrations.

According to the Science News article, researchers presented data that showed that it wasn’t mainly the antioxidants that chocolate has that can ward off cardiovascular disease, nor is it all forms of dark chocolate that are rich in these compounds.

Research has shown that commercially processed cocoa powder very little flavanol content, but retains a high concentration of other antioxidants. However, most flavonols get altered by other biochemicals in blood before their antioxidant properties can function.

Another key piece of evidence that came up at the Symposium was from two genetically similar populations of Kuna Indians who are renowned for their amounts of cocoa they drink. One group of this tribe lives on the San Blas islands off Panama and drinks an average of 5 cups of cocoa daily, while the other lives in Panama City drinks fewer than 4 cups per week.

As expected, the island-dwelling tribe had significantly lower blood pressure and upto 6 times as much flavonols in their urine than the other kind. But there was also a difference in the kinds of cocoa the two tribes drank. While the island-dwellers picked fresh cocoa beans, dried them under the sun and grinded them into a powder, the city counterparts drank commercial cocoas that have been as heavily processed as U.S. cocoas and in the process virtually devoid of flavonols altogether.

In addition, the  death rate from heart disease of the Kuna islanders is less than 8 percent of that in mainlanders, and only 16 percent as many islanders succumb to cancer. The two populations were matched for age, weight, and a number of other factors that might affect heart and cancer risks to provide as accurate a set of information as possible.

Mars Inc., the world’s largest chocolate manufacturing company, like any other does not want to modify its popular and successful recipes, but they have recently begun marketing a relatively low-calorie, high-flavanol chocolate bar using a specially processed starting cocoa ingredient called CocoaPro with nearly 5,000 milligrams of flavanols per 100 grams of cocoa. This compares well with the Kuna islander’s cocoa beans which contained nearly 4,000 mg/100 g flavonols while their cocoa powder had 2,000 mg/100 g.

In sharp contrast, commercially available cocoa powders or chocolate drinks that can be purchased in American supermarkets have flavonoid contents substantially less than 5 percent of CocoaPro’s.

“In stark contrast,” the researchers observe, “all of the commercially available cocoa powders or chocolate drinks that can be purchased in American supermarkets have flavonoid contents substantially less than 5 percent of [CocoaPro’s].”

So now we know what to do to be pros about cocoa.

Leave a Reply to The Local Cook Cancel reply