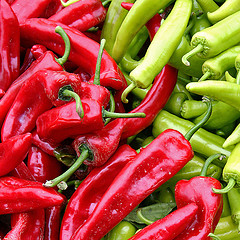 I can’t tell you how many times I have broken a sweat in a restaurant. I’m not talking about a girly glow. I’m talking about sweat pouring off of my face and dripping onto my plate. The kind of sweat that makes people stop and stare and wonder if perhaps I am some sort of drug addict.

Surely after so many embarrassing meals I would have learned not to order the spiciest thing on the menu by now, but there’s something about a chili pepper that I can’t resist.

[social_buttons]That something, it turns out, is capsaicin, a chemical compound produced by chilies to ward off unwanted consumers. The higher the concentration of capsaicin in a chili, the hotter it is.

Capsaicin stimulates a type of cell that is responsible for transmitting touch, sound, light, taste, and other sensory stimuli to the brain. These cells, known as sensory neurons, receive information about their external environment via protein molecules called receptors. Receptors are the electronic keypads of the molecular world – they can only be activated or deactivated by specific hormones, drugs, or toxins containing the appropriate code.

Although capsaicin produces a burning, painful sensation when you bite into a chili, it also triggers the release of pleasure chemicals that make us feel exhilarated and euphoric. Once capsaicin activates the heat receptor, a chemical known as substance P transmits a pain message from the neurons to the brain. When the brain registers pain, it responds with a dose of self-medication: the release of endorphins.

At the same time substance P is causing pain, it also rewards that pain by prompting release of dopamine, the chemical version of positive reinforcement. Besides chilies, certain foods, sex, and drugs can trigger the release of dopamine.

Like any substance that inundates your system with endorphins and dopamine, chilies can be addictive. Self-described “pepper-heads” or “chili-heads” report building tolerance levels to chilies’ heat in the same way a coke addict needs more and more cocaine to get high. Chronic consumption of chilies depletes reserves of substance P, thus limiting pain transmission and desensitizing one’s reaction to capsaicin. This desensitization even works in the short term, such that the antidote to a fiery mouth is, paradoxically, to eat more chilies.

Unlike most drug addictions, capsaicin addictions are relatively harmless and, under some circumstances, might be beneficial to your health. Because of its analgesic effect, capsaicin is used topically to treat aches and pains associated with arthritis and muscle sprains/strains. Ongoing research suggests that capsaicin’s anti-inflammatory and anti-oxidative properties might make it useful in the treatment of cancer, obesity, Type 1 diabetes, and cardiovascular disease.

(Image courtesy of svenwerk at flickr under a Creative Commons license)