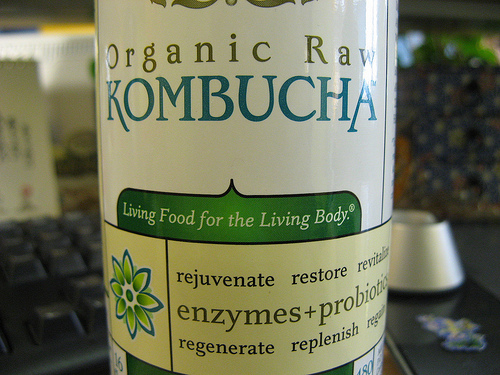 An elementary school student was sent to the Vice Principal, questioned by police, and suspended for bringing kombucha in his lunchbox.

The Newport Beach, California child had been bringing the kombucha that his mother packed him on a regular basis, until school authorities noticed the glass bottle and confiscated it. Later that day, he was called to the Vice Principal’s office for violating the school district drug and alcohol policy and questioned by a police officer without a parent present.

When the school finally did contact the boy’s mother, she was – not surprisingly – distraught. She’d taken extra care to pack the bottle in a neoprene sleeve to prevent breakage. Kombucha is safest in a glass bottle, since a plastic container can leach into the drink.

While some kombucha does have a miniscule amount of alcohol because it’s a fermented beverage, it’s absurd that the school considered it a violation of this policy, especially since they did not test the drink for alcohol content. As The Healthy Home Economist points out:

“It is important to note that these events took place without the school even attempting to test the alcoholic content of the kombucha or conducting due diligence of any kind which would have revealed that kombucha is a healthy beverage similar to apple cider and clearly not the equivalent of beer or wine.”

The Vice Principal even tried to enroll the child in an alcoholics class.

After the mother fought for her son, the school revoked the suspension, and now the school district is trying to say that they never took disciplinary action on this student. As The Healthy Home Economist points out in their rebuttal to the school district’s press release:

“You call keeping a child in the school office for the entire day, interrogating him about where/when he obtained this ‘illegal’ beverage, telling him he may have to transfer to another school, attempting to sign him up for a youth alcoholics program and then having him sign a 5 day suspension notice ‘no disciplinary action?'”

I would hate to see what real disciplinary action at that school looks like. I’d also love to hear from your moms and dads out there! Does your child drink kombucha? Do you pack it in his or her lunchbox for school?