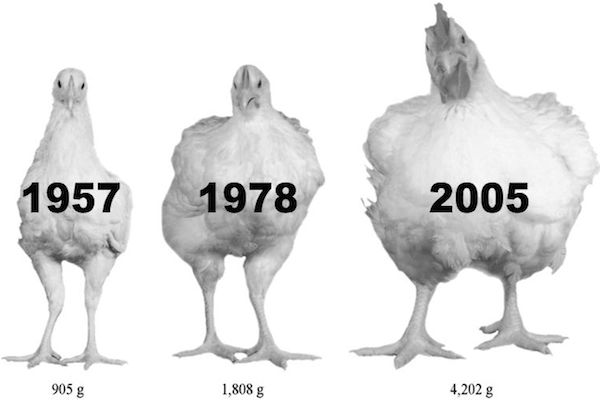 We eat lots of chicken — about 8 billion chickens in the US each year. That’s about 83 pounds per person — double what we consumed in 1965. Chicken consumption surpassed beef consumption in 1992 and has increased ever since.

But these birds are not your grandmother’s chickens. They’ve grown in size from 905 grams (about 2 pounds) in 1957 to a whopping 4,202 grams (about 9 and a quarter pounds) in 2005. These freaks of nature would shock your ancestors.

The Forgotten Story of Chicken Evolution

The chickens we eat today used to be called the chickens of tomorrow. In the 1940s, supermarket giant A&P (which I now know is a shortened version of the name Great Atlantic & Pacific Tea Company) had a contest — the “Chicken of Tomorrow” contest. Chicken had been one of the few unrationed proteins during World War II; A&P was the country’s largest seller of poultry retailer. It saw an opportunity to get some PR and grow the poultry market at the same time.

The contest was intended to inspire farmers to breed meatier chickens — the “ideal chicken,” according to the book Poultry Science, Chicken Culture: A Partial Alphabet. A&P and the USDA — which partnered with A&P on the contest — believed the ideal chicken was the meatiest bird producers could produce. The ideal chicken would have broader breasts, bigger drumsticks, plumper thighs, and more white meat. It would also grow faster than the chickens of the day.

The contest was supported by a media circus. There were exhibitions, tours, and chicken dinners. Concerts, dances, a parade, and a rodeo. There was — believe it or not — a Chicken of Tomorrow Queen. You can watch a 1948 documentary to learn more.

The winners? Arbor Acres White Rocks purebreds and Vantress Hatchery’s Red Cornish crosses. Eventually, these two breeds were crossed to become the Arbor Acre breed — which is the ancestor of most commercial meat chickens raised around the world today. Chicken evolution and engineering led to chickens with less than half the feed-to-weight ratios of 1945 chickens. These chickens also grow from chicks to five-pound birds in just six weeks — less than half the time it took 50 years ago.

These ideal chickens don’t have ideal health. The bigger, fatter chickens get sicker than the birds of yesterday. Confinement and excess weight lead to stress, reproductive issues, cardiovascular disease, and skeletal problems. Heavy antibiotics use — needed to combat disease — has led to disease-resistant bacteria, which are present in about half of all chicken in US stores.

A great read on Modern Farmer states: “We’re still eating the Chicken of Tomorrow today — but maybe it’s time to hold another contest.” I couldn’t have said it better.

Want to learn more? Get educated:

What do you think about the contest that led to the “ideal” chickens we eat today?