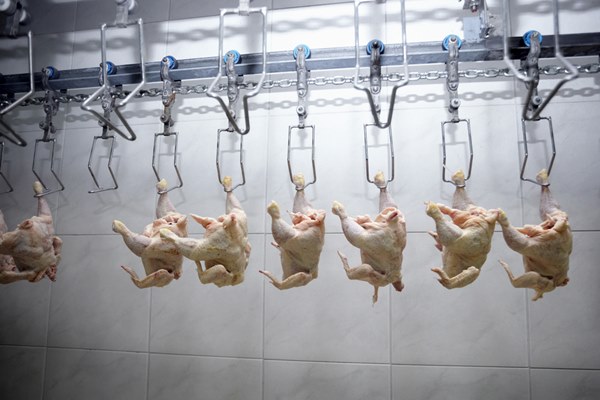 Do you still eat chickens? There’s never been a better time to consider ditching birds from your diet. New reports find ridiculous levels of bacterial contamination in chicken meat, including many antibiotic resistant strains. Both organic and conventionally raised birds were found to be riddled with potentially dangerous bacteria, calling USDA practices into serious question and providing abundant inspiration for alternate sandwich-ingredient exploration.

Consumer Reports just published The High Cost of Cheap Chicken, reporting that 97% of tested chicken breasts contain harmful bacteria. THe report points out that of the 48 million people who contract foodborne illness each year, “more deaths were attributed to poultry than to any other commodity,” according to an analysis of outbreaks from 1998 through 2008 by the national Centers for Disease Control and Prevention (CDC).’

More details from this disturbing report:

More than half of the samples contained fecal contaminants. And about half of them harbored at least one bacterium that was resistant to three or more commonly prescribed antibiotics.

Public-health officials say they think that the resistance to antibiotics in general is such a major concern that in September the CDC released a landmark report outlining the dire threat it poses to our health. Antibiotic-­resistant infections are linked to at least 2 million illnesses and 23,000 deaths in the U.S. each year. And if antibiotic-­resistant bacteria continue their scary spread, they could lead to deadly infections after routine surgery or even a seemingly innocuous cut because the drugs that doctors prescribe will have lost their effectiveness.

So: there’s poop in over half of chicken samples tested, and about half were contaminated by antibiotic-resistant bacteria. Yummy, right?!

The other noteworthy new report on chicken ick, also released today, is from The Pew Charitable Trusts and titled Weaknesses in FSIS’ Salmonella Regulation. According to the Washington Post, it underscores “serious weaknesses” in the U.S. Department of Agriculture’s oversight of poultry plants’ and ‘also criticized the government’s failure to push more aggressively for recalls of contaminated meat.’

There’s poop and antibiotic resistant bacteria in your chicken; the USDA isn’t really regulating either of those things to any meaningful degree; and you’re eating poop and risking foodborne illness no matter what kind of chicken you buy.

That just leaves one question to consider: WHY BUY IT?

Why not leave the chickens alone, and avoid all that ick on your plate? Go here to discover a rich world of non-chicken-related menu items to try, and enjoy a poop-free non-antibiotic-resistant-disease-propagating table!

Humans have no nutritional requirement for ick.