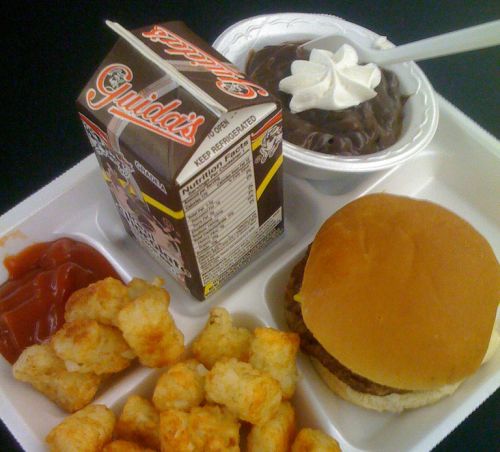 A Chicago public school has banned homemade lunches. Students at the school are required to buy their lunch from the school cafeteria.

Exceptions are made for allergies and other medical reasons. The article in the Chicago Tribune didn’t mention whether allowances are made for religious reasons, but presumably they are. However, it leaves open the question of whether dietary choices for ethical reasons – vegetarian, vegan, locavore, GMO-free, and others – are respected.

Children who attend Little Village Academy, a middle school in the Chicago public school system, have not been allowed to bring lunches from home for the last six years. Principal Elsa Carmona said she started the policy after watching children bring soft drinks and flaming hot chips for lunch on field trips.

Is the Food at Little Village Academy Better Than Homemade Lunches?

I couldn’t find an online lunch menu for Little Village Academy, so I’m not sure how much healthier their lunches are than the ones I might send with my kid. Apparently, many kids at the school throw away their lunches uneaten.

High school kids from another Chicago school attended a school board meeting to complain about the unhealthy foods they were being served from the school cafeteria. The CEO of Chicago Public Schools has promised that next year, the foods will have less sugar and salt and more fruits and vegetables will be served.

Little Village Academy isn’t the only school that has banned homemade lunches. Still other schools in the Chicago area allow lunches to be brought from home, but lunch monitors confiscate foods that are too high in salt or sugar. Those foods are usually returned to the student after school.

Concern over childhood obesity and the lack of nutrition in many processed foods has been behind much of the recent push for better food in schools. Children don’t always make the best choices for themselves. Parents don’t always know what’s in the food they send to school with their kids. School is a good place for nutritious habits to be taught.

I’m sure the principal has the best interests of the children in mind, but it seems a bit much to me. I want to be the one to shape my child’s eating habits. The school staff might respond that I can’t see what my child is eating during school hours and they need the authority to control what she eats.

What do you think? Has the staff of Little Village Academy and the other Chicago public schools overstepped their authority? Or are they doing the right thing by enforcing good eating habits?