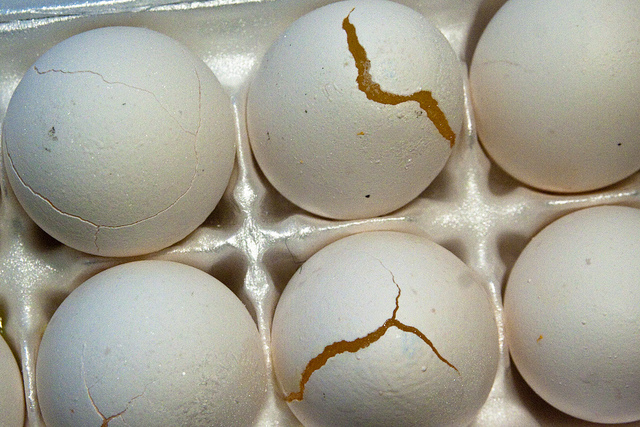 Are the American Egg Board and other federal checkoff programs Freedom of Information Act exempt? They think so.

We’ve written a bunch here about the federal checkoff programs that push meat, dairy and eggs onto consumers in clever ad campaigns. These ‘checkoff programs’ use funds gathered from the producers and are funneled through the USDA to promote consumption of these foods, which is a fundamental problem with the USDA. The USDA has a ‘dual mandate’ to both promote unhealthy foods like factory-farmed animal foods AND create our federal nutrition guidelines.

Even if you’ve never heard of these checkoff programs before, you probably know what they are:

+ Beef: it’s what’s for dinner
+ Pork: the other white meat
+ Got Milk?
+ The Incredible, Edible Egg
+ Recent sports star campaigns promoting chocolate milk (learn more about how irresponsible this campaign is here)
+ and so many more, including corporate campaigns at fast food restaurants to push excessive cheese consumption!

But it seems that these programs are coming under increasing scrutiny. A recent report on NPR detailed how these programs are trying to keep their meaty documents away from the Freedom of Information Act (FOIA)… but that’s just not going to work!

A Brief History of Embarrassing Emails

News about this started last year, when the American Egg Board emails were released showing that they were pretty mad about Just Mayo! products. To comply with with FOIA request, the American Egg Board turned over documents showing that it had plans to fight back on Just Mayo!, calling the product a huge threat to the future of eggs, a $5.5 billion industry. Their emails included a plan to get Whole Foods to drop the product and even ‘joked‘ about putting out a hit on the founder of the company

Needless to say, the Egg Board folks were pretty embarrassed by these emails, so they are working with the House Appropriations Committee to keep such emails exempted from the FOIA. NPR reports, “the panel urged the USDA to make sure that FOIA does not apply to the American Egg Board and all similar Research and Promotion boards that the USDA oversees.'”

The NPR article makes a great point about these ‘checkoff programs’ being controversial, partly because they live in between industry and government, which is what makes them potentially exempt from the FOIA.

Parke Wilde explains that when these boards were facing challenges from farmers that didn’t want to pay in (it is now a requirement), they wanted to be a part of government in order to force farmers to pay into this system. However, now that they want to avoid the embarrassment of further exposed emails, checkoff programs are now pitching themselves as private.

From the NPR article:” In early April, a dozen agricultural industry groups — but not the checkoff programs themselves, because they aren’t allowed to lobby Congress —- asked Congress to declare the checkoff programs exempt from the FOIA because they ‘are funded solely with producer dollars, and therefore are not agencies of the federal government.’ The House Appropriations Committee has now adopted that view. Even if it became law, the language could face a challenge in the courts.”

Why is this important for us? Not only should we be able to know what our government is saying about our food industry generally, we need to keep an especially close eye on industrial animal agriculture. The egg industry, and most other animal farming and processing, is one of the worst industries to be in, and there a million reasons we don’t want to be supporting it anyway. These products lead to environmental degradation, contribute unsustainable and unhealthy products to our marketplace, nevermind the torture needed to keep animals in these conditions.