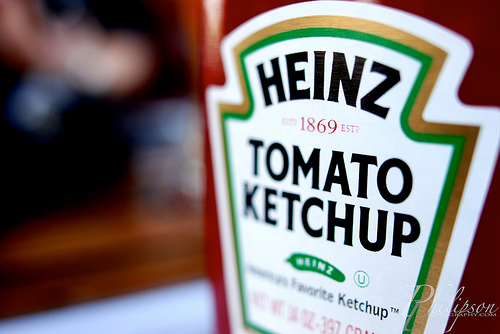 This week brought two announcements of major ketchup brands Heinz and Hunt’s changing their formulas in response to consumer demand.

Hunt’s announced the switch from high fructose corn syrup to sugar in their ketchup. High fructose corn syrup (HFCS) is often blamed for America’s weight problems. Sugar has become more popular among consumers in recent years as part of a general call for more of a product’s ingredient list to be made up of recognizable foods. It’s likely possible to buy HFCS by the bottle at your local grocery store, but the paper bags of sugar are a lot more familiar to Americans.

While the chemical composition of HFCS is similar to sugar, the flavor is quite different. Many companies are using “real sugar/no HFCS” as a selling point in their products. Until recently, Mexican Coca-Colas were made with sugar, instead of HFCS, and were sought after by people preferring the taste of sugar. It will be interesting to taste the difference between the old Hunt’s and the new HFCS-free ketchup.

Not to be outdone, Heinz followed quickly with the notice that they’re cutting salt in their ketchup by 15%. Salt has been implicated in the risk of stroke and cardiovascular disease. Doctors have long recommended that people add less salt at the table, but since 80% of the salt we consume is in processed foods, reduction at the table has had a minimal effect.

Smaller organic and natural foods companies have been offering foods with less salt for some time, but their market share is small in their respective areas. With 60% of the U.S. ketchup market, and with ketchup being America’s most popular condiment, perhaps Heinz can start a trend of less salt among major brands of processed foods.

Both Hunt’s and Heinz brands of ketchup contain tomatoes, vinegar, salt, and sweetener (sugar or HFCS) as their principal ingredients, along with “other seasonings”, which in Heinz consists of natural flavors, spice, and onion powder.  One tablespoon of ketchup contains about 15 calories, all from carbohydrates, and a little vitamin A.  With the tomatoes in ketchup, there is some nutritional benefit that is not cancelled out by the added sweeteners.  As with all things, moderation is key.

But keep in mind, if you’re looking for health benefits from ketchup, organic brands have triple the lycopene of the major conventional brands.