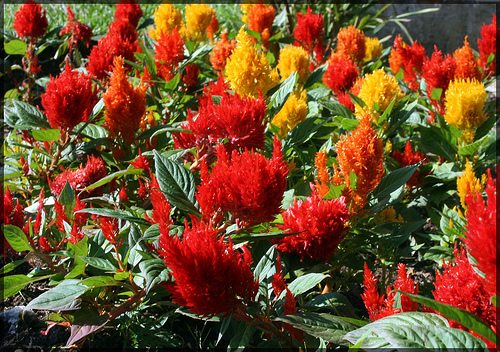 You probably know Celosia as that lovely ornamental flower that shows up in fall landscapes, but did you know it’s also a vegetable?

Celosia is commonly used in the United States as landscaping or in cut flower arrangements. But in parts of Africa, India, and Indonesia, it’s well-known as a vegetable.

The leaves, young stems, and young flowers can all be eaten like field greens – boil up a mess of them with peppers – or like young amaranths, steamed and lightly seasoned.

Celosia reseeds easily and takes care of itself.  There’s a lot of potential for increasing food security globally with a plant like this.

It’s good for a kitchen garden and kids can just pull a few leaves for a snack whenever they want.

Have you ever tried eating Celosia? Do you prefer it raw or cooked?

Image by marcusrg, used with a Creative Commons license