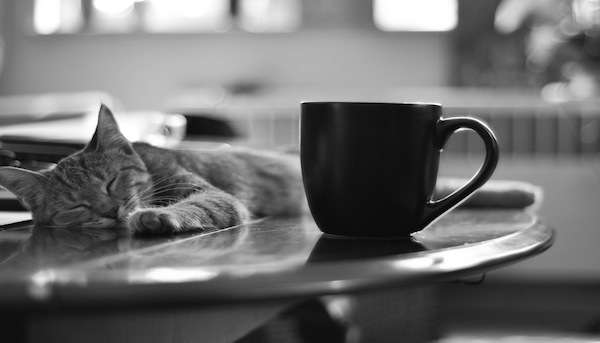 Really, what could be better than a warm cup of tea and a strange cat sitting in your lap? If you often find yourself pining for this combination, the wait may soon be over as America is close to getting its first cat cafe.

According to the Atlantic, cat cafes–made popular in Japan over the last decade–may soon get past strict U.S. food service regulations and begin appearing stateside. “Courtney Hatt and David Braginsky, a cat-loving duo from San Francisco, are currently at work on KitTea, a cat cafe concept they hope to open in the city this summer,” reports the Atlantic.

Mirroring the trend that’s been popular in Japan since the mid-2000s, and now also popular throughout Europe, KitTea envisions itself as tea house meets “cat and human oasis.” The Atlantic reports, “To ensure the place is not too crowded or chaotic, the cafe will be at least 1,600 square feet, housing a maximum of 10 cats and 30 to 35 people at a time. KitTea is partnering with a local rescue group to take in shelter cats.”

Considering the number of feral cats and shelter cats in the country (the Humane Society estimates one cat or dog is euthanized at shelters every 11 seconds), cat cafes may be keeping some lucky cats from winding up euthanized, or living on the streets and getting run over by cars. But KitTea has to get its concept to fly with strict food safety laws that prohibit non-service animals in food facilities.

One of the ideas they have is to put up walls and a hallway between the tea service area and the cat area, allowing guests to come and go from cat area after ordering their tea. According to the Atlantic, “KitTea has yet to sign a lease on a space, but assuming it can find a landlord willing to take on the project, the plan is to work with a contractor and architect to design an interior that’s safe and enjoyable for both humans and felines.” Sounds purrfect.