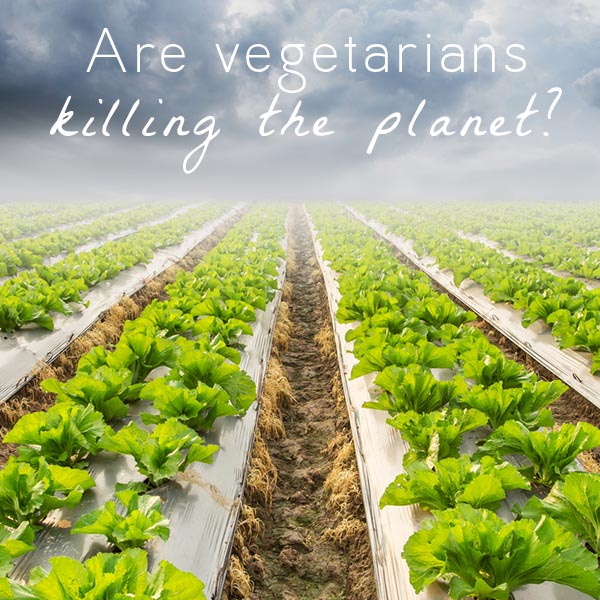 Vegetarians are not killing the planet, and a Carnegie Mellon press release suggesting that they are gets it wrong.

A new study found that lettuce is worse for the environment than bacon, and the news had a freakout, with headlines like “VEGETARIANS ARE KILLING THE PLANET!”

The study also found that producing some other plant-based foods is worse for the environment than producing some animal foods. The problem is, the short press release about the study really oversimplifies what the researchers did and the impacts of individual foods. That lead to overly-generalized headlines like the one above.

In the study, the researchers looked at three diet scenarios:

Here is the chart where they mapped the general findings, on a scale of 1-100: As you can see, the picture is more nuanced than the press release implies. For example, fruit and fruit juice have much higher impacts than vegetables. They also lump together fruit and juice. I’d be interested to see how fruit would stand on its own, since producing juice has so much associated waste.

The study found that following the USDA Dietary Guidelines, even with a calorie reduction, would increase environmental impact. Using the USDA guidelines makes sense, since they do influence how people eat, but it can also make the results a little bit confusing. Both seafood and dairy have large environmental footprints, and lumping them together with fruits and vegetables to determine a total environmental impact is pretty inaccurate.

Take dairy, for example. According to the United Nations Food and Agriculture Organization, the dairy industry alone is responsible for four percent of global greenhouse gas emissions. That takes into account not only the land and resources to care for cows but the impact of crops needed to feed those cows.

The main impacts of producing vegetables are growing and transporting, which explains why a delicate crop like lettuce would have a huge impact. It needs a lot of water to grow, and it has to be transported and stored carefully and under specific conditions. Other vegetables are a lot less high-maintenance.

Since the study also lumps all vegetables together, it’s not really painting a true picture of our food’s impacts. As Scientific American points out, “That’s not to say all vegetables are bad. Onions, okra, carrots, broccoli and Brussels sprouts all have decent environmental footprints.”

As you can see from this report, type of vegetable matters, but so does format. Frozen carrots, for example, produce significantly more greenhouse gases than fresh, bunched carrots. Food miles are an aspect of agriculture that The Carnegie Mellon study didn’t break out. Lettuce grown in California and shipped to Georgia is going to have a much higher footprint than Georgia lettuce sold in Georgia or even in the Southeast, for example.

As Hillary Hanson points out in her Huffington Post piece about this study:

“In other words, the researchers didn’t find that vegetarianism is bad for the environment. They found that not every plant product is more environmentally friendly than every meat product.”

It’s also important to note that there are environmental factors that the Carnegie Mellon study didn’t look at at all. The researches chose to focus on greenhouse gas emissions, water, and energy use “in light of their accessibility, both in terms of data availability of these impacts for a wide range of food products.” The study doesn’t factor in issues like pesticide use, animal antibiotics, or animal cruelty. All of these are important environmental factors of our dietary choices, but the researchers did not (or could not) measure them. That they were outside the scope of this research doesn’t mean they’re not important.

The relationship between what we eat and our impact on the planet is incredibly complex, which I think is the true take-away from this study.  We need to look beyond general dietary guidelines and consider not just the food group but where it’s grown, how it’s grown, and how it’s going to impact public health.