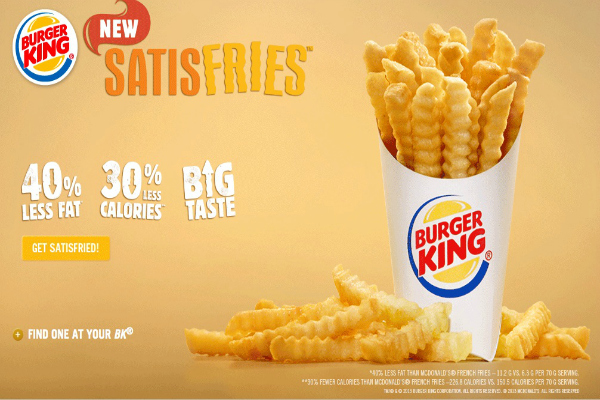 According to the BK website, Satisfries, their new crinkle-cut french fries with “40% less fat and 30% fewer calories”, are cut from “real, whole potatoes” and “fried to tasty perfection – so they’re always crispy on the outside, and hot and fluffy on the inside.” A large order of Satisfries has 410 calories, 17g of fat and 460mg of sodium.  In contrast, BK’s signature “thick cut salted” french fries (notice there’s no mention of “real” or “whole” potatoes?) contain 500 calories, 22g of aft and  710mg of sodium. Hmm, when I do the math that looks like and 30% less fat and 20% fewer calories. That is because BK’s marketing campaign compares their fries to McDonald’s fries, not their own.

We don’t know much about how exactly BK reduced the fat, calories and sodium from Satisfries, but we do know that they charge more for them. But, shouldn’t they be less expensive to make if they cut out fat and sodium?

The USDA states that:

The current dietary intake of Americans has contributed to the obesity epidemic. Many children and adults have a usual calorie intake that exceeds their daily needs, and they are not physically active enough to compensate for these intakes. The combination sets them on a track to gain weight.

With 410 calories and 17g of fat, BK’s new low-fat french fries are nothing more than a marketing gimmick. Couldn’t they do better than that?