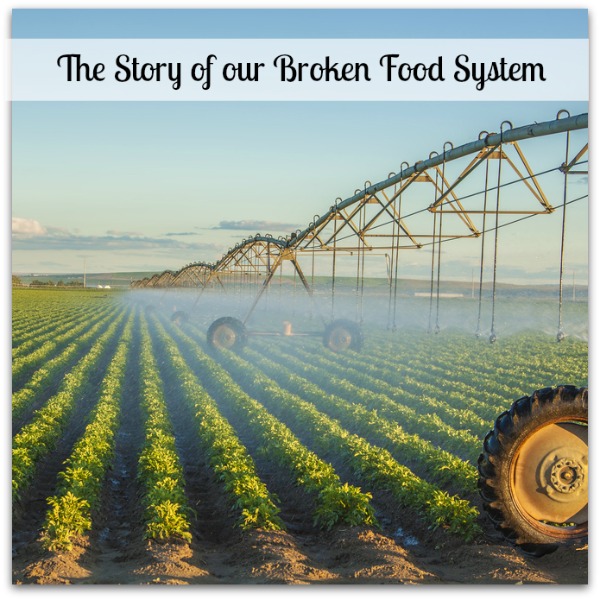 In this post we’ll share the reasons that our food system has become unsustainable and unhealthy for both people and planet, and we’ll share dozens of ways you can help build a more sustainable food system. We can change our world with every bite!

Mid-century agricultural strategy pushed for bigger farms and large-scale subsidies to ensure that no American citizen went hungry. But this system has become outdated, and our food system is in disrepair. The only winners in this food game are large food conglomerates and processed food companies. The losers are small farmers, small food companies, and the entire population.

Here are the three main reasons our food system is broken:

But these problems are not insurmountable, and we have the power to make changes everyday with what we choose to eat and drink. Everyday you can vote for a better food system by spending your money with stores, companies, and farmers that you want to support. This gives you a chance to affect change three or more times a day (depending on how hungry you are)!

How to build a better food system

There is big money is behind corn and soy. Because these crops are subsidized by the federal government, we have an excess of them in our food system. But most corn grown in the US is not for our food. Scientific American says,

“Today’s corn crop is mainly used for biofuels (roughly 40 percent of U.S. corn is used for ethanol) and as animal feed (roughly 36 percent of U.S. corn, plus distillers grains left over from ethanol production, is fed to cattle, pigs and chickens). Much of the rest is exported. Only a tiny fraction of the national corn crop is directly used for food for Americans, much of that for high-fructose corn syrup.”

Like corn, most soy grown in the US is not used to make tofu, but is instead used in processed foods like soybean oil, soy protein, and other processed soy products. But even the small percentage of corn and soy used for human food has had disastrous consequences for our health because it’s turned into processed foods like corn syrup, corn oil, cornstarch, xanthan gum and dozens of other food and non-food items. Research shows that as corn products have become more present in our food supply, our health has been declining. The rise of corn-sweetened soda and beverages– along with the addition of corn syrup to nearly all processed foods, including bread, milk, candy, soups, meats and pasta sauce– parallels the rise of the obesity epidemic in the US.

Learning where corn and soy products are hiding in your diet is the key to eliminating them. Cutting out soda and all beverages with added sweeteners can help reduce your risk of diabetes and obesity, but also improve your health in other ways, like learning to appreciate the real flavors of food and balancing your palate to taste flavors other than sweet.

2. Advocate for labeling of foods The population is divided about whether GMOs are good or bad for our food system. We’re of the opinion that GMOs are an unsustainable option that do not bode well for the future of agriculture, and there is a lot of science to back this up.

GMOs (or genetically modified organisms, also called genetically engineered foods or bioengineered foods) are made by inserting the genes of one plant, virus or animal into another plant to create desired traits. One example is the Roundup Ready Soybean produced by Monsanto; the soybean has been engineered to tolerate large doses of the chemical Roundup, which works for a short time, but encourages larger doses of chemical applications as superweeds grow resistant to the application of the pesticide.

GMOs are changing farming in various ways, including the superweeds, declining bee and pollinator populations, and increased soil degradation. GM crops are promoted as helping farmers by reducing pesticide application, improving yields and reducing drought– but none of these have turned out to be true. Finally, as GMO foods have become ubiquitous in our food supply, food allergies, intolerances and food-related disorders have become more prevalent across all sectors of society. Because there cannot be studies of a direct connection between GMOs and allergies without a control group, we have only the correlations to back this up. However, many studies have found that when removing GMO and chemical ingredients from the diets of affected individuals (especially children), remarkable changes take place: weight loss, reduction of symptoms of autism, and decreased food sensitivities and allergies.

Under the guise that GMOs will feed the world and solve food challenges worldwide, chemical companies such as Dow, Syngenta, Pioneer and Monsanto are creating novel, patented foods that allow them to control the seed supply, control the chemical supply (fertilizer and pesticides), and thus control farmers and consumers. Pesticide Action Network explains how it came to be that chemical companies are now producing food crops: “After WWII, chemical companies needed a market for wartime inventions, and pesticides were put to work in U.S. fields. In the decades that followed, trade and development policy coupled with savvy marketing [allowed] chemical companies to effectively export an entire model of agriculture. Before long, farmers around the world found themselves on a ‘pesticide treadmill’— requiring ever more (and ever more expensive) chemical inputs to stay afloat.”

So whether the companies are doing a great service to the consumers by creating these novel products, or whether they have more nefarious goals, choosing GMO foods should ultimately be the consumer’s informed choice. Without any labeling laws in the US, consumers are left to guess what’s in their food, and those that want to avoid GMOs have to skip products that they deem questionable. There are strong, active movements to require labeling in the US (as already exists in Europe for many US-made products), and we encourage you to learn more about labeling initiatives in your city or state, and support GMO labeling advocacy groups like the Non-GMO Verified Project.

3. Learn about the externalized costs of our food system

Perhaps you’ve noticed at the grocery store that it’s often cheaper to get fresh produce from very far away than it is from your own region? Imported foods are able to be shipped in from far away because our global trade system is built on the myth of affordable fossil fuels. Fossil fuels are used in the growing, harvesting, and transport of foods, but the system is bound to fail as fossil fuels become more scarce. This fuel- and chemical-intensive farming system degrades the health of our planet globally and locally. So what are the economic structures that allow this to happen, and how can we vote with our dollars to change the system?

Trade agreements like NAFTA allow for very cheap produce to be grown around the world under the guise of free trade between nations, but it’s often the importing countries that benefit from the trade. The New York Times says, “[NAFTA] has cut a path of destruction through Mexico. Since the agreement went into force in 1994, the country’s annual per capita growth flat-lined to an average of just 1.2 percent — one of the lowest in the hemisphere. Its real wage has declined and unemployment is up.”

Secondly, this system of trade is relies on large farms that grow thousands of acres of commodity produce in a monocropped field. Monocropping (growing just one type of plant in a field) is a sure way for problems like crop failure and degraded soils. It can also set us up for crop failures of a large scale. It has been shown that diversified, small farms actually produce more food per acre, with better ecosystem management and more long-term sustainability, than large farms.

The same is true for animal agriculture. In the past few decades, animals have been taken off the fields and moved to industrial feed lots, known as concentrated animal feeding operations (CAFOs). Companies that run CAFOs pay for the feed, pay for the land, and eventually sell us the meat. But no one directly pays for the remediation of the fields after thousands of pounds of concentrated liquid manure has been sprayed onto it, no one pays for the respiratory disease that affects residents downwind of CAFOs, and no one pays for the antibiotic resistant bacteria that now plague our hospitals due to the prevalence of sub-therapeutic antibiotic use in CAFOs. But we all pay for the associated health care costs of rising obesity, diabetes and heart disease rates that are associated with animal foods. Researcher and editor Daniel Imhoff, says, “Somehow we’ve forgotten how to add the total costs of cheap meat production to our health, environment, the loss of vibrant rural communities with lots of family farms.”

Intensive fossil fuel use, unfair trade agreements, ecosystem degradation and unhealthy animal farming conditions demonstrate the concept of externalized costs in the food system. Externalized costs are the costs of doing business that we do not pay for directly, but create a host of indirect costs. This means we pay artificially low prices for unhealthy, processed food, because these externalized costs are not included in our grocery bills, and that we pay higher insurance premiums because the cost of health care is on the rise. Marion Nestle, renowned author and researcher for Food Politics, says that the human health, safety and environmental costs of food are too high to be ignored for much longer. She says that because our food system subsidizes unhealthy foods, the current cost estimate for obesity and related illnesses is about $147 billion annually for both health care and lost productivity costs.

So how do you change your diet to reflect these ideals? Choosing responsible foods– food that is raised or grown locally, products made from whole food ingredients, and less processed foods– is a place to start. Choosing more local foods is helpful, but this doesn’t mean that you have to eat only local– global food culture is such that it’s not possible to eat a fully local diet without making great sacrifices. Most of us appreciate our daily Sumatran coffee, Dominican chocolate, French wine, and Spanish olive oil. These foods, unable to be produced in all locations, should be considered more like a luxury item, one that can be offset by choosing foods from closer to home when possible. Choose organic, fair-trade and responsible food whenever possible.

Now that you know about the hidden costs of your food, you have the opportunity to make daily changes that can affect change throughout the food system. Continue to learn about where your food comes from, how it affects your health, and how your food dollars can vote for change from this failing system.