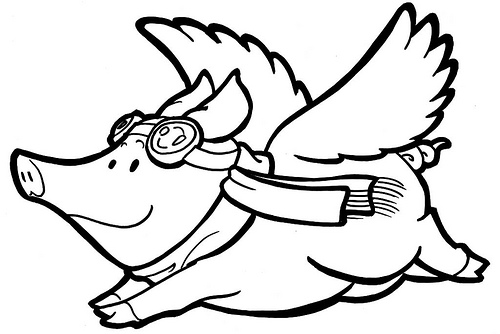 A survey released last week in conjunction with National Butchers’ Week suggests that many British consumers think that pigs can fly.

An alarming 17 percent thought that pork wings are an actual cut of meat.

Nearly twenty percent thought that tofu ribs and leg of liver were cuts of meat. As many as 23 percent thought that chicken chops or lamb drumsticks were something that you can buy from a butcher.  And vegetarians beware: one in twenty did not think that haggis, faggots, game pie, or oxtail contained any meat.

The survey is just another indicator of how removed we’ve become from our food. Meat packaged in styrofoam and plastic (often with the bones and skin removed) looks nothing like the animal from whence it came, which makes it easy for people to forget about the food chain that they’re participating in.

And, in the case of most meat bought from the supermarket, that food chain is a long, inefficient one with disastrous environmental consequences.

It’s always been amazing to me how many people criticize me for eating deer meat yet don’t think twice about eating a fast-food burger. But I guess if they’re the same people who think that pigs have wings, then maybe I can understand where they’re coming from.