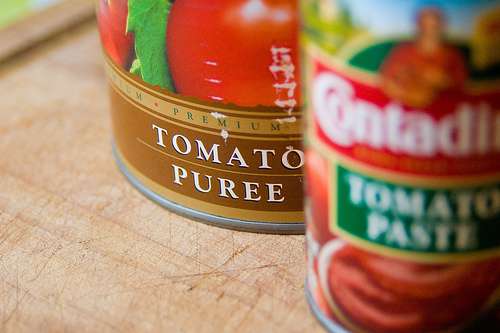 Bisphenol A (BPA) has gotten a lot of press recently, from infant formula to Sigg bottles, it’s everywhere.  But did you know that it’s also in your canned foods, especially canned tomato products, pasta sauces, and vegetables?

BPA is a compound used to manufacture plastics and has been in mainstream use for over 50 years.  But for all of its benefits, BPA has some significant drawbacks.  It can leach from plastics and plastic linings into the product that it holds, especially with acidic foods like tomatoes.  From the food products it then is absorbed into the human body, where it causes damage to the cardiovascular and reproductive systems, and can contribute to incidences of cancer, diabetes, asthma and obesity.

Knowing its effects on the human body, consumers have tried to eliminate their exposure to it by getting rid of lined aluminum water bottles, plastic tupperware, and plastic baby bottles.  But BPA lurks in other places as well, in canned foods.  Studies by the Environmental Working Group (study results here) show that significant amounts of BPA are in canned vegetables and being absorbed into the human body.

There are some companies that don’t use BPA to line their cans.  You can check out this website by Organic Grace for a list of various companies, and whether or not they use BPA to line the cans of their products.  Some surprising names are on the list, companies like Amy’s, Muir Glen, and Trader Joe’s still use BPA liners in some of their canned foods.

In case you’re on the fence about whether BPA is harmful to humans, here are some links to a few pertinent studies done recently:

There are some ways to mitigate the amount of BPA you are exposed to in canned foods.  You can simply not use canned tomatoes and other canned foods as often, or at all.  If you do buy them, look for glass jars or BPA free cans.