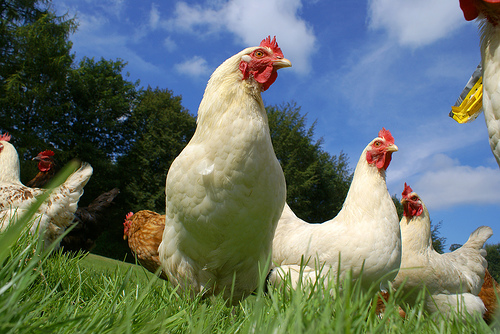 Harvard-trained pediatrician Dr. Philip Landrigan, who has published over 500 scientific articles and is also a retired captain of the US Naval Reserve’s Medical Corps., has been trying for some time to get organophosphates banned. He has been successful getting them banned from homes, but they are still commonly used on farms. A 2009 study in the journal Therapeutic Drug Monitoring now provides “the first definitive connection between the most common childhood cancer, a form of leukemia, and the very organophosphate pesticides that Dr. Landrigan has been trying to get banned,” Rodale writes.

Additionally, the heavy, continuous use of antibiotics on livestock is another major topic of concern for Dr. Landrigan and Rodale. Rodale writes: “The rampant use of antibiotics to treat all food animals (cattle, hogs, and poultry) in these [animal] slums is shortsighted and dangerous, as many doctors have attested. Even the FDA is calling for a ban. Could you imagine keeping your children on antibiotics full-time just to keep them ‘healthy’.”

From 2001-2006, MRSA (methicillin-resistant Staphylococcus aureus) head and neck infections caused by drug-resistant bacteria in children have gone from 12% to 28%. Dr. Landrigan considers that this is directly a result of overuse of antibiotics in livestock, which get passed on to those who eat the animals.

A peer-reviewed study in Applied and Environmental Microbiology confirmed that MRSA is found in almost half the pork and 20 percent of beef samples taken from a sampling of 30 supermarkets in Louisiana. The European Union, South Korea, and many other countries prohibit preventive use of antibiotics in the factories where animals are raised for meat. Not in the United States. In fact, farmers can just go to their local farm stores to buy a 50-pound bag of antibiotics–without a prescription.

And what do most parents and schools do in response to the increasing number of bacterial and viral infections? They use more pesticides. “You and your kids are washing your hands in pesticides,” Rodale writes. “The EPA recently allowed triclosan, the predominant antibacterial agent used in products from shampoo to water bottles to crib liners, to be re-registered… even though the EPA acknowledges that triclosan interacts with androgen and estrogen receptors and affects the thyroid glands in rats. The EPA acknowledges that triclosan is linked to antibiotic resistance, and that it is showing up in fish and drinking water.”

There is much more in this book and I think it is definitely worth reading. I only touched on a few topics that stood out to me. Towards the end of Part I, here are a few good summary remarks by Rodale:

There is much more we can study to help illuminate the problems with chemicals. But there is enough evidence to know now that synthetic chemicals are destroying our health and our ability to reproduce and, thus, our ability to survive as a species. Agricultural chemicals have statistically and significantly been implicated in causing all sorts of cancers, behavioral problems, attention-deficit/hyperactivity disorder, autism, Parkinson’s disease, reduced intelligence, infertility, miscarriage, diabetes, infant deformities, and low birth weight. And with endocrine disruptions come genital deformities, early puberty, gender “issues,” and, again, diabetes and cancer. But all this research comes from the few scientists courageous enough to swim against the tide, to resist the easy funding offered by chemical and pharmaceutical companies and the pressure of their peers who rely on that funding.

Eliminating chemicals one at a time will never make a big enough difference. The chemical industry is adept at changing names and formulas just enough to placate government regulators. By seemingly eliminating known toxins like DDT, Alar (daminozide), and lead, we are lulled into an illusion of safety. But it is an illusion. There is only one way to ensure our safety:

We must stop poisoning ourselves now. We must remove chemicals from the process of growing, harvesting, and preserving food.

I will see what Parts II and III bring, but, for now, I would highly recommend getting a copy of this book and reading it for yourself. I can say that my brief summary here doesn’t do the book justice.