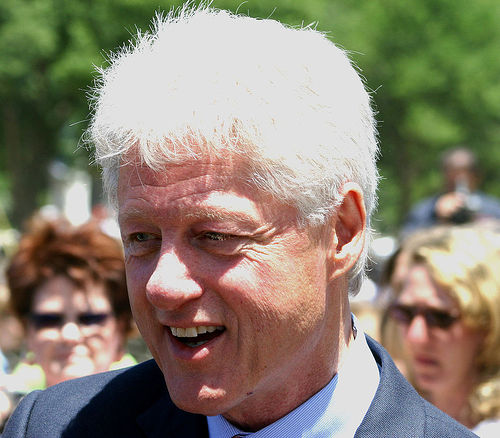 I’ve written on a number of famous vegetarian and vegan celebrities in the past, from Orlando Bloom to Henry Ford to Carl Lewis to Mike Tyson. As you’ve probably heard, Bill Clinton is the latest to become (almost) vegan.

Clinton has switched to a primarily plant-based diet mainly for his health. He wants to live longer, and after having some health problems that doctors and researchers have shown can be addressed by a plant-based diet, he decided to switch to this diet.

As he mentions in the short clip directly below, 82% of people since 1986 who have gone on a plant-based diet “have begun to heal themselves.”

Clinton has lost 24 pounds of excess weight since the switch, getting back to something like his high school weight.

I’ve written on the health benefits of vegetarianism here on Eat.Drink…Better. before as well. But a piece on Bill Clinton’s switch by Bruce Friedrich, Vice President for Policy at PETA, adds a number of good points:

The biggest killer in America is heart disease (it kills almost 50 percent of Americans), and obesity is at epidemic levels.

For years, Doctors like HuffPo Medical Editor Dean Ornish, John McDougall, Caldwell Esselstyn and Neal Barnard have been pointing out that obesity among vegetarians is a tiny fraction of the obesity rate among the general population, and that heart disease can be not just prevented, but reversed with a plant-based diet.

A recent study found that vegetarians are happier. Perhaps these findings presented by Dr. Ornish in the video below have something to do with that:

Your brain gets more blood, you think more clearly, you have more energy, [and] your skin gets more blood so you don’t age as quickly [on a plant-based diet]. Even your sexual organs get more blood in the same way that Viagra works. So yeah you’ll probably live longer, but you’ll also feel better.

It looks like Clinton has some good reasons to switch and stick to a vegetarian diet.

Of course, vegetarianism is also good for the environment, and for the animals who get to keep their lives (and hopefully not be tortured).

There are many reasons to switch to a plant-based diet, and while the numerous health benefits are not the most important in my mind, it is nice to see them finally being widely acknowledged and leading, aging figures like Bill Clinton taking notice of them and helping to enlighten the world on this topic (even if he isn’t living like a full vegan for moral reasons).

As Einstein, one of the most admirable figures in modern history, said: “Nothing will benefit human health and increase chances for survival of life on Earth as much as the evolution to a vegetarian diet.”