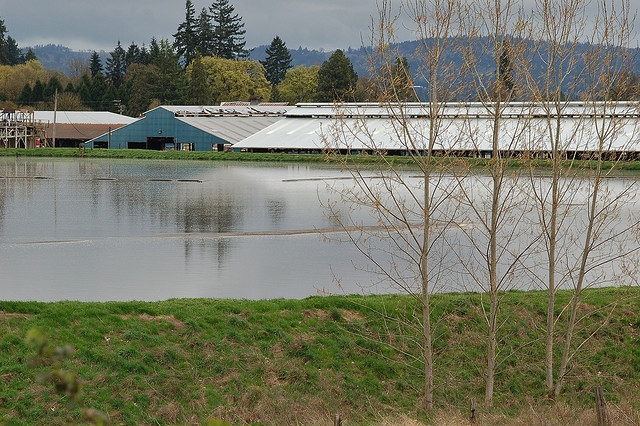 Last week the EPA withdrew a proposed rule that would have required CAFOs to actually disclose information about how they dispose of toxic waste, for the purpose of regulation ensuring compliance with the Clean Water Act. The proposed rule would have required CAFOs to report their basic waste management practices to the EPA. But industry interests threatened litigation — so never mind! Once again the EPA fails to protect anyone but Big Ag interests, continuing its bid for a solid ‘F’ in environmental and consumer protection.

“The Environmental Protection Agency announced late last week that it is abandoning its plan to gather even the most basic information from the over 20,000 highly polluting and largely unregulated factory farms in the United States. This move by the EPA is a dereliction of duty.

“The facilities, known as Concentrated Animal Feeding Operations, or CAFOs, are responsible for a multitude of environmental and public health impacts and make up part of an industry that is the single largest contributor of pollutants to our nation’s waterways. The failure to follow through with a 2011 proposal to gather even simple data like locations of the facilities, number of animals contained and proximity to waterways is clearly pandering to agribusiness during an election year…

“EPA’s withdrawn rule was initially proposed because the Agency recognized that these industrial facilities are improperly evading regulation. In 2008, the U.S. Government Accountability Office issued a report urging the Agency to gather more information to protect U.S. citizens from the air and water impacts of these factories. The report stated, ‘EPA has neither the information it needs to assess the extent to which CAFOs may be contributing to water pollution, nor the information it needs to ensure compliance with the Clean Water Act.’

“In its proposed information gathering rule from last fall, EPA noted that these facilities generate around 300 million tons of manure each year, triple the amount of bodily wastes from all the people in the country. It confirmed that manure from these massive operations contain more than 40 diseases that can be transferred to humans through dirty water, including tuberculosis, salmonellosis, infant diarrheal disease and giardiasis. These diseases are in addition to the nutrients, heavy metals (including arsenic) and antibiotics that pour into our water supplies from this industry…”

Recap: Yes, You Read That Right!

CAFOs generate huge amounts of toxic waste, likely to end up in public waterways; they don’t have to report any aspect of this pollution to the ENVIRONMENTAL PROTECTION AGENCY charged with regulating industrial pollution; and as of 2011, the EPA acknowledged that this state of affairs was problematic.

But simple transparency scares the bejesus out of factory farming interests — as evidenced by all the ag-gag legislation introduced recently; by the apoplectic outrage from factory farming interests at the mere idea (and precedent!) of improving conditions for battery hens; by the fierce resistance to labeling GMO foods; and by the Big Ag hissyfit over this proposed waste reporting rule. According to the Associated Press, industry groups had threatened to sue the EPA if the rule went into effect.

Just like we saw with proposed GMO labeling legislation in Vermont and Connecticut earlier this year, entities charged with protecting public interest stood up to corporate manipulation with all the resolve and courage of used chewing gum.

The FDA was recently chastised by a federal judge for pandering to Big Ag interests instead of actually doing its actual job, regarding agricultural abuse of antibiotics; with the decision to withdraw this CAFO waste reporting rule, the EPA demonstrates its willingness to stride boldly down that same slimy odoriferous path.

Like the USDA with GMO crops, or the FDA with agricultural antibiotic abuse, it’s abundantly clear that our regulatory agencies are no longer actually regulating. Rather, they have become paper giants, rubber-stamp approval factories for the corporations whose revolving doors they frequent. The priorities of these ‘public’ agencies have shifted: public benefit no longer drives the bus. The EPA has become a stilted puppet, and it’s pretty clear who’s holding the strings.

Question of the Day (And It’s a Biggie!)

Are we — as citizens of a representative democracy — willing to tolerate subversion of the public good for the purpose of corporate benefit?

1. Contact the EPA and your legislative representatives, and tell them factory farms shouldn’t get a free pass on polluting our waterways with enormous amounts of untreated sewage! They should be required to report details of their waste management to the EPA, like any other polluting industry.

2. Don’t reward obnoxious behavior; vote your dollar! Skip the meat, eggs and dairy altogether, or buy from local small-scale growers. Make ‘no factory farmed animal anything’ a way of life!

3. Use your social networks to share articles and information about this issue, and about every other problem caused by our so-called regulatory agencies abandoning public benefit for the ignoble goal of currying corporate favor.

The EPA demonstrates priorities as transparent as CAFO waste management practices aren’t — and all too often, those priorities have nothing to do with environmental protection or public benefit.