Just to make sure you get your daily dose of good news, we’re happy to report on the story of Bhutan, the first country to pledge to go fully organic by the year 2020. This is a big deal for those passionate about organic foods and has the potential to make a big impact on food and farming policy around the world.

This happy news comes from Climate Progress, which reported on the story a few days ago. Bhutan, located in the high Himalayas between India and China, is perhaps most famous for its policy about Gross National Happiness. Rather than measuring the Gross Domestic Product (a measure of the economy), as most countries do, in 1972 the leader of Bhutan decided that happiness was the most important thing for the 700,000 people living in the country. As it turns out, the secret to Bhutan’s happiness is actually thinking about death: check out this great post here from the BBC about why thinking about our own mortality can make us happier.

Bhutan has a majority Buddhist population, and the culture is based on ideals of non-violence and happiness. And the leaders are looking at happiness from a lot of perspectives: Appachanda Thimmaiah, Bhutan’s agricultural advisor from 2008 to 2013 and associate professor of sustainable living at Maharishi University of Management in Iowa told Think Progress, “When we say happiness, it’s not just happiness of humans. It’s happiness of the soil, happiness of the animals, happiness of all sentient beings […] Organic farming was very much part of the gross national happiness. You cannot think about applying chemical fertilizers and pesticides and say that your country is happy.”

It’s been clear for years that organic foods not only reduce the amount of pesticides in the environment, but also in our bodies! A large-scale study has even shown that organic farms have higher yields than conventional farms, when compared acre to acre.

Organic farms can also drastically improve our climate: healthy soil is a huge carbon sink, and a humus-rich soil allows atmospheric carbon to be absorbed at a rate much higher than conventional, nutritionally-deficient soils. And it grows healthier plants, which absorb more carbon. It’s clear that conventional methods, which strip the soil of nutrients and produce less healthy food, is not the solution; organic farming can indeed feed the world. 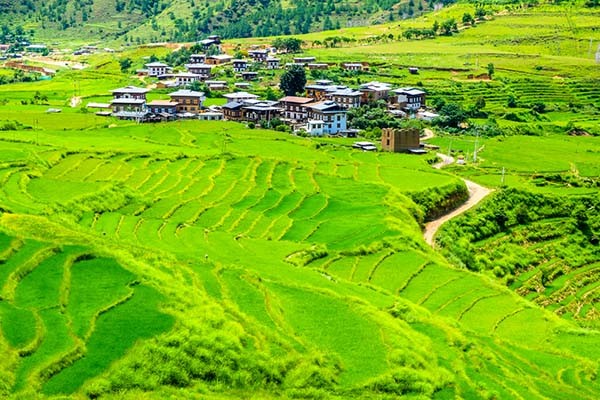 Across the globe, the amount of acreage for organic farms continues to grow each year, although conventional, chemically intensive agriculture still makes up the majority of farming operations. But a small nation like Bhutan might change all of that. If they can set the precedent for a totally organic nation, other larger countries will surely follow suit. It’s very exciting to think about the health and environmental benefits that research will be able to confirm on a whole population using only organic farming methods!

Kristine Nichols, chief scientist at the Rodale Institute, a nonprofit that supports research into organic farming, told Climate Progress, “For a country like Bhutan, there are some things that are a lot easier, because they are a smaller country […] When you’re looking at a country like the U.S., if we were to go 100 percent organic, more than likely it isn’t going to be an instantaneous process. It’s going to be a transition process.”

In Bhutan, Thimmaiah said it’s still a transition process, and he thought carefully about how to approach it. Rather than speaking to just ‘organic’ agriculture, he framed it as ‘low-cost’ agriculture that will help farmers be more successful. “Thimmaiah was confident that organic agriculture, when done correctly, would be more cost-effective than the transportation costs associated with shipping chemical fertilizer throughout the country. [He] also worked to help farmers understand organic agriculture as being complementary to the local resources — and even waste products — of Bhutan.”

Even a staunch organic advocate like myself knows that the US is not quite ready yet for a fully organic nation, but learning about nations like this is inspiring, and sets a great precedent. As Bhutan’s agricultural sector continues to thrive under their organic protocols, I can only hope that other nations will start paying attention and stop spraying chemicals on our food.