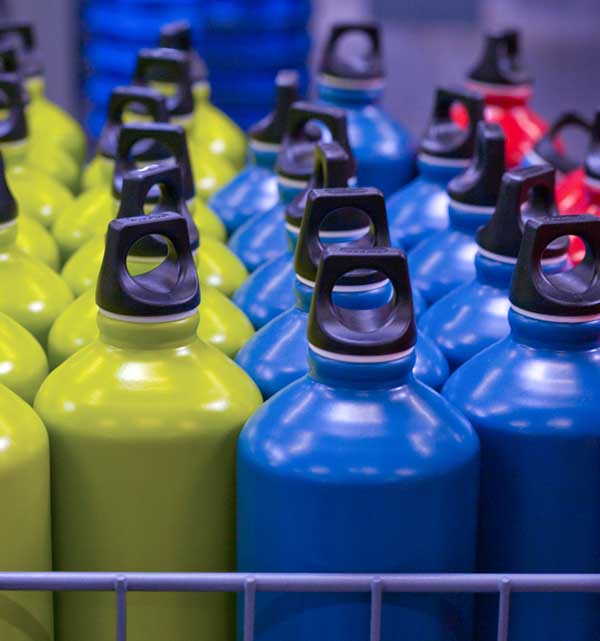 What’s the best bottled water? It comes from the tap and goes into your reusable bottle!

There’s a time and a place for bottled water. In my Green Diva opinion, I think it’s great in emergencies like earthquakes, hurricanes and other disasters that shut down access to clean water. Or, if your tap water is suddenly tainted and you a) get thirsty before you’re able to install a water filtration system or b) truly can’t afford a filtration system (please choose large jugs of water to reduce the environmental impact when possible! It’s also cheaper this way. Consider refilling jugs from kind neighbors’ taps).

If you’re stranded in the middle of the desert or a deserted island with no water in sight and stumble across a bottle of water, grab it. If you think it’s possible you’ll be stranded, have a reusable water bottle on you at all times. Bringing a carload of bottled water to your kid’s soccer game because it’s easier? I think you know the answer.

For more, I recommend reading 10 reasons to avoid bottled water and No more plastic water bottles!

The water was contaminated with a toxin that’s produced by the algae microcystis. The toxin can cause dizziness, nausea, vomiting, numbness and liver problems. It can also kill wildlife and pets. Hence, unsafe water.

What’s microcystis algae bloom, you ask? It’s primarily phosphorus from farm fertilizer runoff. The nitrogen in fertilizer affects the size and composition of the annual bloom. In other words, microcystis algae blooms are fed by modern agriculture, which is mean to feed people and animals, which, of course, need water. And… are you seeing the same vicious circle I am?

Boiling water doesn’t remove the toxin. Just hours after the alert went out bottled water (helpful in emergency situations like this) couldn’t be found within about a 100-mile radius.

Unfortunately, Lake Erie and other parts of the Great Lakes are in jeopardy again. It is unacceptable that our region has polluted a lake so significantly that drinking water for approximately 11 million Americans and Canadians is at risk. A changing climate and a legacy of damage to Lake Erie make the job of cleanup complicated. But we know this pollution is a clear danger not only to our drinking water, but to our way of life and our region’s economic vitality.

This problem is not out of our control. It is preventable. We can change this.

We need swift commitments from the governors of the Great Lakes states and the premier of Ontario to implement measurable reductions in nutrient pollution, particularly phosphorus, on a clear timetable to protect our region’s health, economy and quality of life.

(Joel will be on The Green Divas Show in the coming months to give us an update!)

Even though California is experiencing their third driest year on record—with nearly 80 percent of the state experiencing “extreme or exceptional” drought conditions—water is still be extracted for bottled water.

It’s hard to believe companies are allowed to continue sucking the state drier, especially considering water is used not just to fill the bottles, but to process them. Coca-Cola bottling plants that produce Dasani use 1.63 liters of water for every liter of beverage produced in California. (According to TheWaterProject.org, it can take three liters of water to produce just one liter of water).

Turns out that California is the only western state without groundwater regulation… if you happen to be a water company and you drill and discover water, it’s yours.

Do you know where your bottled water comes from? Dasani, Aquafina, Arrowhead and Crystal Geyser all use water from California.

A representative from Arrowhead said something very profound: “You have to remember this is a 120 year old brand. Some of these sources have long, long been associated with the brand.” As if that matters. I mean, California is in a drought. That same person agreed that from an environmental perspective “tap water is always the winner.”

The fact is… tap water and using reusable water bottles is the better choice. Certainly there are the instances like in Toledo where getting water from other sources is the only option. But U.S. tap water is better regulated than bottled.

Fractivists are asking Gov Jerry Brown to stop fracking in California, which is in a drought. Could fracking be making the drought worse? Food & Water Watch Adam Scow calls it a “triple threat to the water.”

1. It requires 140,000 to 150,00 gallons of water out of the water cycle for every frack job. According to the U.S. Energy Administration, oil companies could drill as many as 25,000 fracking wells in California—each one using nearly 10 times more water than a typical California family in one year.

2. The fracking fluid could leach into underground acquirers and the toxic waste water left over has to be disposed of.

3. The oil and gas produced from fracking will contribute to global warming, of course, which can exacerbate droughts.

Fracking isn’t just a problem in California. A new study says that hardly any toxicity information is available for one-third of the 190 commonly used fracking fluid compounds. Another eight are proven to be toxic to mammals. (Last I checked, I’m a mammal. Are you? Then you should be concerned).

If the controversial northern leg of the Keystone XL pipeline is approved and built, the resulting amount of carbon emitted into earth’s atmosphere could be up to four times greater than the U.S. State Department estimated, according to a new scientific paper.

First, what’s the Keystone XL? A pipeline (not yet approved) that  would “transport raw, toxic tar sands oil right through the American heartland—from Alberta, Canada to refineries in Texas—and threatens to wreak environmental havoc on both sides of the border.” (Natural Resources Defense Council)

So, how and why would the climate impact be four times greater? Here’s the logic: If the new pipeline is built, more tarsands oil will likely be consumed. And the tar sands process—separating oil from sand and mud— produces three times the greenhouse gas emissions of conventionally produced oil.

People who support the pipeline claim that with or without the Keystone pipeline, we’ll be consuming the oil and the tar sands will inevitably be developed. What do you think of that logic?

Those in the energy industry are not impressed with arguments by the anti-fracking movement in the state. “They’re skilled at marketing, skilled at hyperbole,” said Rock Zierman, CEO of the California Independent Petroleum Association in Sacramento, a group that represents 550 companies and individuals in the oil industry. “We use less than a total 300 acre-feet of water a year for fracking. That’s equal to what all golf courses in California use in half a day.”

About a third of the 2,000 new oil wells in California are hydraulically fractured, he said. “They talk about air pollution from methane leaks,” Zierman said. “Our air [quality] laws established regional air districts that regulate all our service equipment, every joint, every coupling [that’s] permitted.” ~ via Aljazeera America

“Florida’s untapped efficiency and renewable potential is a key solution to the many threats to the state’s power sector, including risky over-reliance on natural gas, increasing costs of fossil fuels, grid reliability and resilience, and mitigating climate disrupting pollution,” says Kelly Martin, Senior Beyond Coal Campaign Representative with the Sierra Club.

Yet Florida, the Sunshine State, many residents aren’t allowed to use sunshine to generate their own power.

The business model of paying installation companies over time for the cost of panels and to allow homeowners sell excess solar power to energy companies makes solar more affordable. But… many southern states have bans or restrictions on these leasing agreements and even assess taxes and fees on solar equipment, making it difficult or impossible for many to harness this renewable resource. You can learn more about this here.

And now for some encouraging news…

Humpback whales and great white sharks are surging in numbers in the waters around New York City this summer, in a wildlife bonanza that is delighting naturalists, environmentalists and fishermen—if not necessarily bathers.

Off New York and New Jersey, some of the largest creatures in the ocean are being spotted in greater abundance than has been the case for decades. Paul Sieswerda, head of the Gotham Whale volunteer marine wildlife tracking group, believes the increasing abundance of whales around the Big Apple is largely prompted by cleaner waters that have encouraged huge rises in the populations of fish which the whales eat. Read more…

A small group of beekeepers in Mexico has inflicted a blow on biotech giant Monsanto, which has halted the company’s ambitions to plant thousands of hectares of soybeans genetically modified to resist the company’s pesticide Roundup.

A district judge in the state of Yucatán last month overturned a permit issued to Monsanto by Mexico’s agriculture ministry, Sagarpa, and environmental protection agency, Semarnat, in June 2012 that allowed commercial planting of Roundup-ready soybeans.

The permit authorised Monsanto to plant its seeds in seven states, over more than 253,000 hectares (625,000 acres), despite protests from thousands of Mayan farmers and beekeepers, Greenpeace, the Mexican National Commission for the Knowledge and Use of Biodiversity, the National Commission of Natural Protected Areas and the National Institute of Ecology. Read more…

A poll commissioned by the Center for Biological Diversity and conducted by Public Policy Polling (PPP), surveying 500 California voters, found that a majority of Californians opposed fracking in their state and an even larger number support a ban on dumping fracking chemicals in the ocean. Read more from our friends at EcoWatch.

Apple bans use of 2 chemicals in iPhone assembly

Apple is banning the use of two potentially hazardous chemicals during the final assembly of iPhones and iPads as part of the company’s latest commitment to protect the factory workers who build its trendy devices.

The decision announced Wednesday comes five months after the activist groups China Labor Watch and Green America launched a petition drive calling on Apple Inc. to abandon the use of benzene and n-hexane in the production of iPhones. Read more…

Say no to the Keystone XL Pipeline!