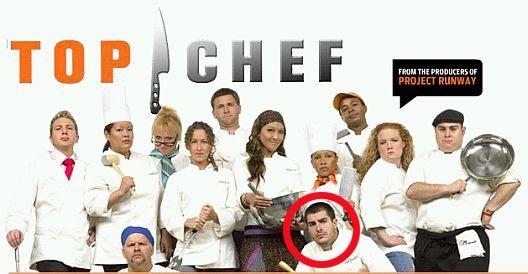 The Bravo TV Series, Top Chef, is one of the highest rated food shows on television right now, and it all started with Season 1 where Harold Dieterle won over the judges and emerged as one of the hottest new chefs in the country world.  But despite the fame and celebrity status that has ensconced him since his big win, Harold remains the picure of humility, reaffirming his commitment to hard work, passion for cooking and his one true love, food.

Although I spent most of season 1 swooning over him his dishes, I put on my journalist’s cap and was the picture pf professionalism in conducting an interview with him (thanks to Divya Gugnani, founder of Behind the Burner) where I learned that it takes more than just skills to create a culinary masterpiece.  It takes heart.  And that’s something Harold has by the measuring cup full.

One kitchen tool you can’t live without: Vita Prep Blender

One ingredient you can’t live without: Salt

Your cooking philosophy in one sentence: Love it and it will do whatever you want

I couldn’t start out the interview without talking about Top Chef. What was it like to win such a fiercely competitive and high profile competition?

It was a great honor to be recognized by influential people in the food industry.

How has the experience impacted you as a chef — and as a person?

As a chef, just have to realize that crazy and unexpected things are going to have to be dealt with everyday. As a person, just stay grounded and remember where you came from.

Your signature dish is spicy duck meatballs. How did you come up with this creation?  Do you have any other up and coming dishes?

I ate a lot of meatballs as a child growing up in an American-Italian home. So I figured, why not and put my own twist on them.  I always have a new dish in the works.

Even though you’ve achieved celebrity status and are a world renowned chef, you pride yourself on a strong work ethic and have worked very hard along your career.  Where does that drive and dedication come from?  Is this mentality instilled in you from your upbringing?

Definitely my upbringing. Both my parents are really great people and hard workers.  I’ve modeled myself after them, and their example.

Have you always been interested in food?  What was your first food job?

I have always been interested in food. I took a Home Economics class in high school to meet girls and it was love at first sight (the food, not the girls!).  My first job was as a dishwasher when I was 13 at a marina restaurant on Long Island.

What are you most passionate about when it comes to cooking?

Pretty much…. EVERYTHING.  You can’t really just pick and chose where and when to turn it on or off. It’s got to be all or nothing. Otherwise something will suffer.

What do you think makes a truly spectacular meal?

Your restaurant, Perilla, is focused on fine neighborhood fare in a small, intimate setting.  Why did you decide to go this route over a big, glitzy spot?  Tell us a little more about the menu.  Do you change it often?  Do you have any holiday specials?

The restaurant is definitely a reflection of myself and my business partner, Alicia Nosenzo, as people. We’re both kind of low key, laid back people. Something big and glitzy never would have suited us. The food is seasonal new American with lots of Asian accents. Basically, I just cook whatever I wake up and feel like making. It’s nice to finally be the boss.  The menu changes 2-3 times a season, with a couple of signatures that remain. We always do special menus for the various holidays.  I like to keep it fun and fresh.

Opening a restaurant is exciting but also very risky — especially in New York City.  How has the experience been so far?  What challenges have you faced and what are your plans for evolving the business?  What’s the greatest lesson you’ve learned to date?

The experience has been really amazing and well received by the public. I’d never cooked brunch before at a restaurant, so it was very interesting watching that menu evolve, and continue to learn in the process.

How do you run your kitchen?  Do you have any hard and steadfast rules?

You need to be very witty and have thick skin in the kitchen. There is no screaming or yelling per se. There is, however, lots of verbal stabs and plenty of sarcasm. There are tons of rules I suppose, but the main one is: Don’t do anything at Perilla you wouldn’t do at home.

Geez… wisdom…. I would say, don’t take what the judges say to heart. Just go cook your food and enjoy it.

Are there green elements to your cooking and food preparation?  Do you think it’s important for chefs to embrace organic ingredients?  What are your thoughts on things like local produce, organic farming and agricultural responsibility?

Definitely green.  Organic not so much.  My feeling on organic is if your going to do organic, then go all the way.  There is no reason to be only half organic. I do believe strongly in hormone-free, chemical-free and unhybridizd food.  Everything just usually tastes better.

Other than the time you spent in Thailand, are there any other cultures that influence your cuisine?

If you had to pick three of your top restaurants of all time, what would they be?

Poonsin in Bangkok, Alinea in Chicago and Eden Rock in St Barths.

Top Chef is in New York City this season.  How does it feel to have the show right here in your own backyard? Will we be seeing any guest appearances?  And have you noticed any major differences over the past two seasons since you were on?

Yeah, it’s definitely about time they made it to NYC.  To be honest, I haven’t really been following the show that closely but the talent level seems really good.

Are there any other television plans in your future?  What’s next for Harold Dieterle?  Where would you like to see all of this lead? What’s your ultimate dream?

I definitely have a lot on my plate right now. Unfortunately, I’m not really at liberty to talk about any of it yet. But I really just enjoy cooking good, earnest food. Parts of me want to expand, and there’s parts of me that love the structure and simplicity of my current life.  We shall see.  There may be a trick or two up my chef coat!

As humble as he is talented, Harold happily shares his tips and tricks at Behind the Burner, an online resource for secrets from master chefs, including his coveted Top Chef-winning recipe for spicy duck meatballs.  You can also watch his video where he shows you how to whip it up personally in a guided tour to meatball perfection. Or, visit his official Bravo TV blog. Next week, Behind the Burner brings us nutritionist extraordinaire, Julie Greebel, author of The Little Black Apron followed by Tracy Stern of Salon Tea and Sarah Endline, the cacao expert and inventor of The Sweet Riot.  And don’t forget the Behind the Burner deals on chef-approved ingredients and equipments that will have you starring as a Top Chef in your own kitchen!