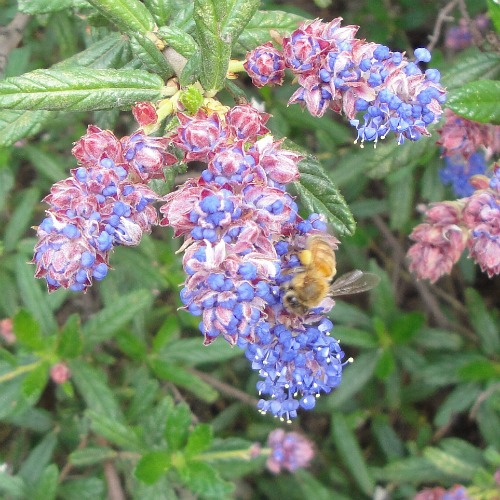 The pressure to stop the sale of the pesticide clothianidin is heating up with a coincidental convergence of several events in the past two weeks: first, a petition filed with the Environmental Protection Agency (EPA) by beekeepers and environmental groups, second, the release of three new scientific studies (detailed in a post by Tom Philpott), and third, the release of a report on the impact of neonicotiniods on bees by the Xerces Society.

Clothiandin, a neonicotiniod pesticide marketed by Bayer, is toxic to bees and other insects, and is implicated in colony collapse disorder (CCD) of honey bees. I was surprised  to discover that not all bee advocates are calling for an outright ban.

Scientific studies have established that neonicotiniods are toxic to bees (honey bees, bumblebees and other native bees), so that is not in question. At issue is whether the pesticide clothianidin causes or contributes to CCD in honey bee colonies. The direct cause or causes of this disorder are still unknown, but it has decimated both commercial and hobby beehives in the United States and Europe. The prevailing thinking is that a collection of conditions or stresses on honey bees are to blame, and that these stressors result in weakened immune systems that leave the bees vulnerable to diseases, parasites, and viruses.

Besides exposure to pesticides, poor nutrition is also one of these contributors, due to the disappearance of habit with proper “bee forage”. Reduction in the conservation of natural areas where bees can find nutritious food, and an increase in large agricultural mono-crops are part of the problem. Commercial hives are trucked all over the country to pollinate crops, which is an added stress.

So it would make sense to limit the use of neonicotiniods, as a commonsense measure at the very least, since the situation is desperate for honey bees, and this may be one action that could help. But not all pollinator advocates are demanding a ban of these pesticides, out of fear it could make the situation worse.

The Petition to the EPA

Commercial beekeepers and honey producers (27 in number) and four environmental groups represented by the Center For Food Safety, have a filed a petition with the Environmental Protection Agency (EPA) for a suspension of registration and a removal of clothianidin from the market. They cite a list of missteps by the EPA in giving the pesticide conditional approval, including the lack of field studies showing that it does not harm honey bees, inadequate labeling, and that it is in violation of the Endangered Species Act.  This group comes the closest to requesting a ban on the chemical.

I spoke with Kathy Kellison and communicated via e-mail with Randy Oliver, both are part of the Bee Friendly Farming (BFF) initiative, promoted by Partners for Sustainable Pollination, an organization that assists farmers with pollinator-friendly farming practices. I asked what they thought of the petition to the EPA brought by beekeepers and environmental groups. They are both in agreement that chemicals used prior to neonicotiniods were much more toxic, such as the organochlorines (DDT, Chlordane) and organophosphates, and they believe there is a real risk of ending up with those or similar pesticides if neonicotiniods are banned.

Growers will demand a replacement pesticide for their crops, and it’s not realistic to think they will use none at this point.

As described on their web site, their organization is:

The Xerces Society Report on Neonicotiniods

In my conversation with Mace Vaughan, the Pollinator Program Director for the Xerces Society, he echoed the concerns of the folks at BFF. He is one of the authors of the report titled  “Are Neonicotiniods Killing Bees?” that was released last week. The report gives an excellent summary of what is known about these pesticides and their effect on different species of bees (different bee species are effected in different ways) and gives recommendations to the EPA. The report does not call for an outright ban, but for the following:

“The report recommends that regulators reassess the bee safety of all neonicotinoid pesticide products, reexamine or suspend all conditional registrations until we understand how to manage risks, and require clear labels so that consumers know that these products kill bees and other pollinators.”

Vaughan was especially adamant that products containing these pesticides that are sold for use in home gardens be labeled clearly with a warning that they are toxic to pollinators.  Home gardeners have been using these products on their roses and fruit trees at much higher doses than is used in agriculture, and it’s likely they have no idea that they harm bees and butterflies.

He made the point that in agriculture and in the home garden, the use of pesticides is often preventative, without knowing if a real problem exists. This is a very harmful practice, and if pesticides where only applied when needed and in a targeted fashion, this would go far in cutting down on their use.

Vaughan sent the Xerces report to the lead toxicologist at Bayer, and to the risk manager and lead risk assessor at the EPA. He received acknowledgement from all of them, and expects a chance to discuss the report with them.

We Can Do Our Part

The enormous problem of reliance on toxic chemicals for large scale food production (millions upon millions of acres) is not going to go away or be resolved soon. But consumers can act and vote with their dollars:  buy food grown without pesticides, and from bee friendly farms whenever possible. Gardeners can stop using pesticides, educate others, and fill their gardens with beneficial flowering plants for pollinators.