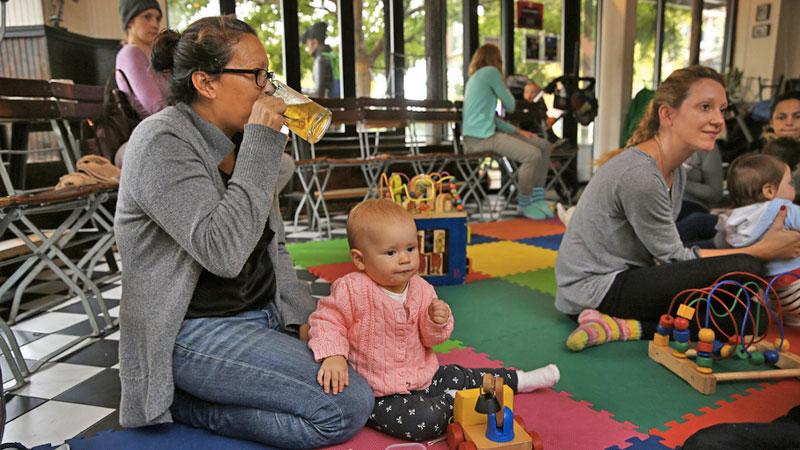 There’s a new trend in big cities that I sure hope makes it to Atlanta sometime soon: beer gardens that welcome parents with small children.

The idea behind these family-friendly beer gardens isn’t to serve beer to kids or even to get parents wasted. It’s creating a communal atmosphere where parents can mingle and kids can play. And mom can have a good, hoppy IPA. I kind of love this idea.

Being a new parent can be isolating. You suddenly can’t do many of the social things that you used to. Yes, being a mom has its moments of magic, and I love my baby boy fiercely. But I also miss being able to meet friends for a beer a Sunday afternoon once in a while. Family friendly beer gardens seem like a place where parents can seek a little child-self balance while still spending time with their kids.

Steven Hanley at our sister site Ecolocalizer wote a great piece on these family-friendly beer gardens recently. You can check it out right here!

Beer gardens and beer halls are popping up in cities all across America and they are discovering a new category of customer – moms with kids. In traditional German beer gardens, whole families would gather to quaff the ales, munch bratwursts, and socialize with their families, neighbors, and friends. At one time, there were over 3000 beer halls in New York City, alone.

On Sunday afternoons, it was common to see families with young children in attendance. “It was part of the rise of working ­class leisure activities,” said Christine Sismondo, an historian and the author of America Walks Into a Bar: A Spirited History  of Taverns and Saloons, Speakeasies and Grog Shops. She says “Some beer gardens would have had bowling alleys, sketch artists, classical music, opera, folk dancing and singing.” In those days of lax drinking laws, it was not unusual to see children drinking beer alongside their parents.

Parents today are not quite so liberal. But those who take their children to beer halls and gardens tend to be more relaxed about alcohol in general. “Modeling responsible drinking is how our kids will learn what’s O.K.,” said Amber Storm, 34, a mother of four in Milwaukee. She likes the laid ­back, communal feel of a beer hall and says the parents she meets there are less overbearing and Type A in their parenting than those at the local playground. “I have more in common with them,” she said. “We all need to take care of ourselves, and if that involves having a stein of beer with a friend — and your kid is safe and in eyesight — then it’s totally acceptable.”

Across the country, German beer gardens are booming. As they proliferate in both gentrifying neighborhoods and city parks, they have become a go-­to destination for family outings, play dates and toddler birthdays. On weekend afternoons, many transform into Gymboree-­like spaces with multiple brews on tap.

When Ashley Primis wanted a to host a birthday party for her daughter’s first birthday party, she arranged with Frankford Hall, a local beer garden in the Fishtown area of Philadelphia, for a buffet of child ­friendly foods. She decorated the tables with toys, coloring books and bubbles. She even brought along a home made cake and a gigantic pink Geronimo balloon.

The 15 toddlers in attendance smashed the cake and created a huge mess but neither Ms. Primis nor her friends seemed to mind. They just ordered another round of beers. “My daughter’s birthday was as much a celebration of us finishing our first year as parents as it was about her. No one was getting sloshed,” said Ms. Primis, an editor at Philadelphia magazine.”

Predictably, some patrons are not happy about this beer and kids movement. They don’t like having what they call “rug rats” and “ankle biters” underfoot at their favorite watering hole. As a result, some establishments set aside specific hours for groups with children while others have set curfews for the kid friendly frivolity. At the Der Schwarze Kölner in Fort Greene, Brooklyn, parents can rent the space for Saturday morning  birthday parties. It is also available a few afternoons each week for caregivers who want to organize a “Babies & Bier” play group. For an entrance fee of $10, DSK, as it is popularly known, provides soft pretzels, sparkling juice and lager.

Chantal Martineau, a DSK customer, believes in moderation. Having a toddler birthday party at a beer hall is taking things too far, in her estimation. She sympathized with Hot Bird, a popular bar in the Clinton Hill section of Brooklyn, when it barred children, even though she was disappointed by the decision. “I remember being annoyed by kids in bars before I became a mom,” she said. “Now I try to be respectful instead of thinking that everyone should adapt to me.”

Urbanization requires finding new ways of making social connections. Mom’s with young children are good business and teaching children how to drink responsibly is a valuable social goal. While many drinking establishments want to tap into this new market, the trick is to not offend existing customers while doing so. Sensible restrictions on times and locations within the establishment where children are welcome seem entirely appropriate.