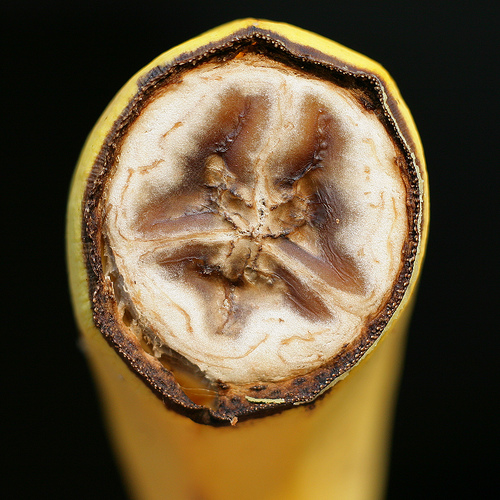 Cavendish bananas, which make up 99 percent of the bananas on the market today, are now facing extinction from a fungus called Tropical Race Four.

Also called Panama Wilt [pdf], Tropical Race Four has been identified as damaging Cavendish banana crops since the 60’s. It had a few resurgences in the last 15 years, and now it threatens the future of the Cavendish banana.

While it seems like a no-brainer to switch to a more resistant type of banana, the Cavendish is one of the few that grows quickly, tastes good, and can withstand the long trip from the farm to our grocery store.

The Future of the Banana

Panama Wilt has attacked crops in Indonesia, Taiwan, China, and the Phillipines, among other banana-producing areas. According to a recent New Yorker article:

Scientists believe that Tropical Race Four, which has caused tens of millions of dollars’ worth of damage, will ultimately find its way to Central America—and to the fruit that Americans buy.

While there have been outbreaks of Panama Wilt in the past, this is the largest one to date, and scientists are scrambling to find a solution. Right now, groups are working on developing genetically modified bananas and on naturally breeding a resistant Cavendish banana.

I know a lot of you have strong feelings about genetically modified foods. If these GM or hybrid bananas were the only ones available, would you eat them?