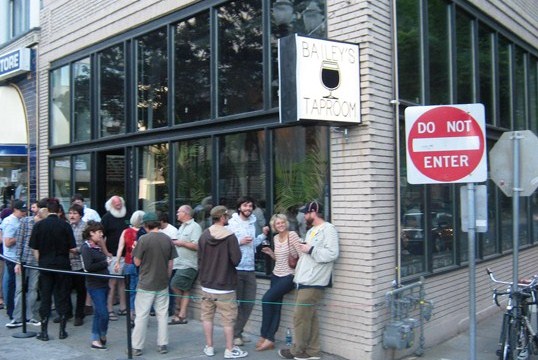 Portland, Oregon is a beautiful city, known for its roses, organic food, environmentally conscious citizens, and its beer.  It has truly become a destination for Oregonians and travelers alike searching for locally made micro brews and craft beers.

It’s hard to walk two blocks in Portland without encountering a brew pub, ale house, or beer bar, but there’s one that stands out as being truly exceptional.  Located in downtown Portland, Bailey’s Taproom is a cozy, modern facility that specializes in Pacific Northwest microbrews and craft brews.  They serve up everything in every imaginable style from a “brutally hoppy IPA, a clean lager, a sour Belgian, a thick stout, or a boozy barleywine”.

They have 20 rotating taps of craft ales, lagers, stouts and porters, meaning that new varieties are tapped daily, and every time you go there, there’s something new from a local brewery.  Bailey’s is also also a social networking innovator, as they have a Twitter and Facebook update feed to keep you abreast of every new keg that is opened.  You can see their current draft list and bottle list which typically includes cask conditioned and organic brews as well.

The staff are knowledgeable, friendly, and always willing to chat about beer, without any hint of pretension that can be found when people know more about a subject than you do.  Along with the great beers they serve, Bailey’s also offers free wireless Internet, and they’re never in a hurry to rush you out the door.  They also have special events – barrel aged beer fests, brewmaster talks, and special release beers.

If you’re ever in the Portland area, I’d highly recommend a visit.  Even if you’re not the biggest beer connoisseur, the staff there can inquire as to your individual tastes and find a brew you’ll likely enjoy.  And for the purveyor of local foods, know that they strive to serve the best, most local beers possible.

Thinking about a tasty beer got you thirsty?  You might as well complete the imaginary meal with some BBQ – see Getting Greener with America’s Best BBQ.