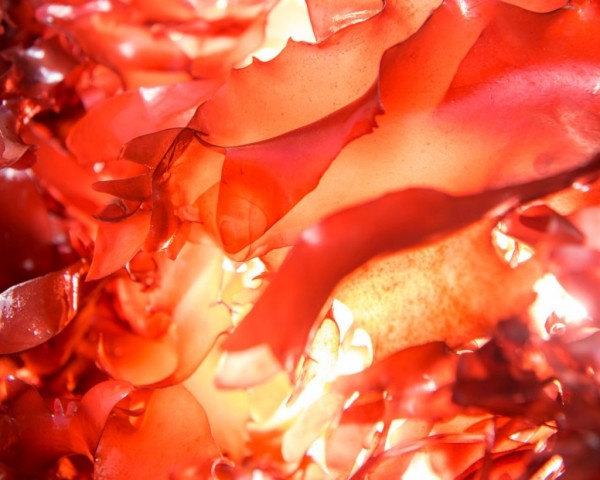 Could bacon seaweed save the oceans and help people eat less meat?

Last week, researchers at Oregon State University announced they have patented a new strain of red marine algae, known as dulse, that grows extremely quickly and could serve as an excellent source of plant-based protein. According to researchers, it tastes exactly like bacon when it’s fried.

But the new bacon seaweed is only part of the good news. The dulse grows very rapidly and thrives in ocean waters with high concentrations of carbon dioxide, nitrogen, and phosphorous. While it grows, it removes those pollutants from the water, leaving the water cleaner than it was before.

Dulse is a red, lettuce-like algae that grows naturally in the coastal waters of the Pacific and Atlantic. For 15 years, Chris Langdon, an aquaculture researcher at Oregon State University’s Hatfield Marine Science Center in Newport, Oregon, has studied dulse, trying to figure out a way to make the nutritious algae grow quickly enough to become commercially viable feed for abalone.

In 2004, he obtained a patent for a particularly fast-growing strain that can double its weight in just 10 days. But a year and a half ago, Chuck Toombs, a business professor at Oregon State University suggested that Langdon might want to stop trying to grow dulse for abalone, and start growing it for humans.

“I think we were at the right place at the right time, where there’s more and more interest in using aquatic plants for human food,” Michael Morrissey, director of Oregon State University’s Food Innovation Center, told ThinkProgress.

Food scientists worry about how civilization will feed the 9 billion people who are expected to be alive in 2050. Aquatic food products like dulse could become part of that solution. “Seaweeds or aquatic plants have been in the background, but I think they need to come to the foreground and be present as an important component in this mix,” says Morrissey. “They are fairly easy to grow, you can grow them in terms of production of biomass, its some of the fastest growing food on the planet, and people need to look at that and take advantage of it.”

The Oregon State Department of Agriculture declared dulse a specialty crop — something that has never happened before for a seafood. This new declaration means the Food Innovation Center can now apply for a grant to expand its dulse research. It has already whittled down a list of over a hundred potential dulse products to two finalists — a cracker and a salad dressing — that they hope will hit retail shelves in the fall.

A seaweed that helps clean the oceans and tastes good. That sounds like a recipe for success.