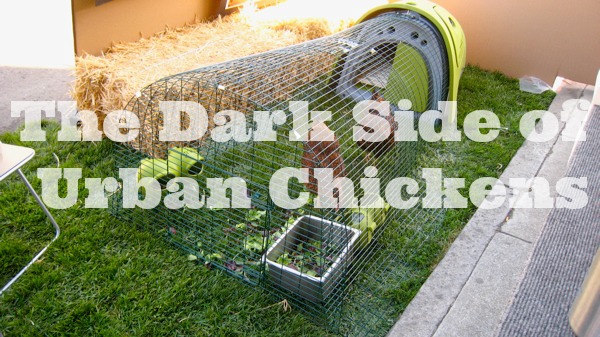 Backyard chickens are a big part of the local food movement, but there’s a dark side to urban chicken-keeping that folks don’t talk so much about.

Whenever I try to bring up the downsides to raising urban chickens, folks write me off as a crazy vegan extremist spreading alarmist propaganda. I have to tell you, that really hurts. What I’m going to tell you here about backyard chickens isn’t made up, and it’s not exaggerated. It’s just the part of the process that folks don’t see, so they may not know about. I am not condemning you, I’m not judging you. I’m just sharing some things that I’ve learned. Heck, back in 2009, I was singing a different tune about urban chickens, and that’s because I didn’t know these things that I’m going to share.

If you know anyone who keeps backyard chickens, you know that those are some lucky birds. My friends who have chicks treat them like treasured pets. They eat well, they have a cozy place to sleep, and they even get hugs. They love their chickens, and they treasure every egg those hens produce for them. These chickens have it good, y’all. I don’t deny that for a second.

So, what’s the problem with backyard chickens? There are a couple of major ones.

1. Backyard chickens are all hens.

So what? Well, that means that people don’t want roosters. There’s a huge demand for female baby chicks, but people don’t want males in their backyard coops because roosters don’t lay eggs. Roosters also crow. All day long. In some areas, it’s legal to keep chickens but not roosters, because the crowing is so bothersome for the folks who live around you.

Let’s assume that about half of the chickens in any clutch are male. That means that for every hen living the good life in a backyard chicken coop there is a rooster that nobody wanted. What happens to those male chicks? They are disposed off. Read: they are killed. Sometimes brutally.

This is an undercover video from one hatchery showing exactly how they “dispose” of male baby chicks. I will warn you: this video is not for the faint of heart:

Unless you’re adopting abandoned hens from an animal rescue, chances are that for every female chick in your flock, there was a male that died horribly.

2. Abandoned chickens are on the rise.

Keeping backyard chickens is not terribly difficult, but it does require time, energy, and money. You have to feed your flock, and if one of your hens gets sick you have to find a vet to help care for her. Many new urban chicken keepers discover quickly that this is all a lot more work than they thought they were signing up for.

According to a recent report from NBC news, that means people are abandoning their chicks at an alarming rate:

However, at the Farm Sanctuary headquartered in Watkins Glen, N.Y. — which operates three shelters on two coasts — some 225 former backyard chickens are waiting now for new homes, said National Shelter Director Susie Coston. They’re among at least 400 to 500 abandoned chickens that show up every year, including many suffering from maltreatment or illness.

Does that mean that everyone who keeps chickens is going to give up on their hens when they get sick, injured, or expensive to keep? No. But it’s something to think about. Just like adopting any other animal, keeping chickens is a commitment.

The other reason that shelters are filling up with abandoned birds? Sexing baby chicks is tough, and sometimes chicken owners discover that one of their chicks was actually a rooster. This happened to a friend of mine. She ended up having to get rid of the rooster because keeping roosters is illegal within city limits here, and her neighbor threatened to call the cops. In other areas where roosters are allowed, some folks pass them off to shelters because roosters don’t lay eggs, the end goal for most backyard chicken-keepers.