via University of Sydney 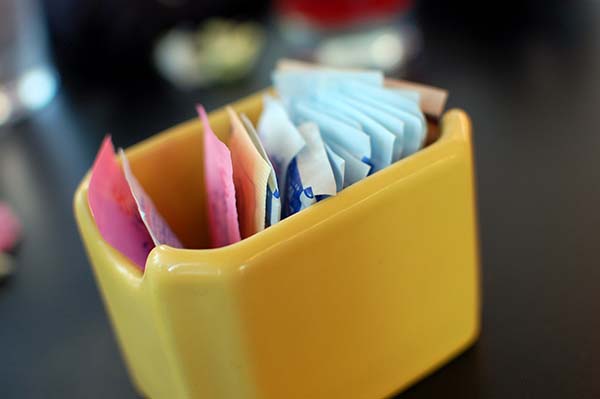 Studies in both animals and humans have suggested that consuming artificial sweeteners make you hungry and actually make you eat more. A comprehensive new study co-led by the University of Sydney has revealed for the first time why this response occurs.

Published today in the prestigious journal Cell Metabolism, the results shed light on the effects of artificial sweeteners on the brain in regulating appetite and in altering taste perceptions.

Researchers from the University of Sydney’s Charles Perkins Centre and the Garvan Institute of Medical Research have identified a new system in the brain that senses and integrates the sweetness and energy content of food.

“After chronic exposure to a diet that contained the artificial sweetener sucralose, we saw that animals began eating a lot more,” said lead researcher Associate Professor Greg Neely from the University of Sydney’s Faculty of Science.

“Through systematic investigation of this effect, we found that inside the brain’s reward centres, sweet sensation is integrated with energy content. When sweetness versus energy is out of balance for a period of time, the brain recalibrates and increases total calories consumed.”

In the study, fruit flies that were exposed to a diet laced with artificial sweetener for prolonged periods (more than five days) were found to consume 30 percent more calories when they were then given naturally sweetened food.

“When we investigated why animals were eating more even though they had enough calories, we found that chronic consumption of this artificial sweetener actually increases the sweet intensity of real nutritive sugar, and this then increases the animal’s overall motivation to eat more food,” said Associate Professor Neely.

Billions of people worldwide consume artificial sweeteners and they are prescribed as a tool to treat obesity, despite little being known until now about their full impact on the brain and in regulating hunger. 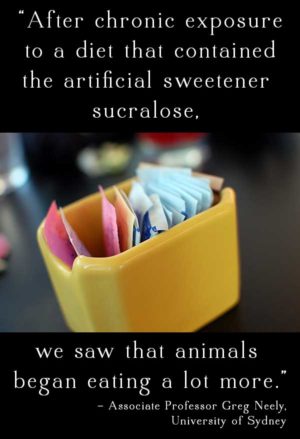 This is the first study to identify how artificial sweeteners can stimulate appetite, with researchers identifying a complex neuronal network that responds to artificially sweetened food by telling the animal it hasn’t eaten enough energy.

“Using this response to artificially sweetened diets, we were able to functionally map a new neuronal network that balances food’s palatability with energy content. The pathway we discovered is part of a conserved starvation response that actually makes nutritious food taste better when you are starving,” said Associate Professor Neely.

To discover whether artificial sweeteners also increased food intake in mammals, Professor Herbert Herzog’s lab from Garvan then replicated the study using mice. Again the mice that consumed a sucralose-sweetened diet for seven days displayed a significant increase in food consumption, and the neuronal pathway involved was the same as in the fruit flies.

“These findings further reinforce the idea that ‘sugar-free’ varieties of processed food and drink may not be as inert as we anticipated. Artificial sweeteners can actually change how animals perceive the sweetness of their food, with a discrepancy between sweetness and energy levels prompting an increase in caloric consumption,” Professor Herzog said.