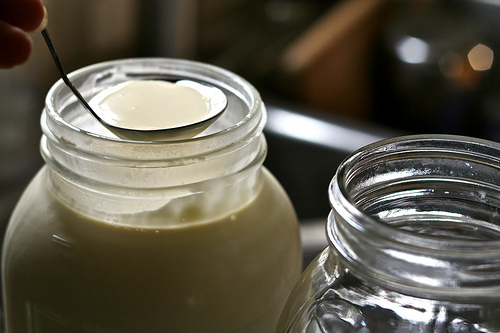 Here’s a video with security camera footage of the raid. The voiceover is from the store owner:
http://www.youtube.com/watch?v=b27EFldZ17k

Unpasteurized milk is regulated in many areas because of safety concerns, and places like Rawsome go to great lengths to skirt these regulations. As the owner describes in the video, they are not a store but a private club. If you want to buy raw dairy, you have to become a member and put in writing that you’re “taking your health into your own hands.”

While dairy (raw or otherwise) is not my thing, I think that a guns-drawn raid is a bit over the top when it comes to enforcing restrictions on food policy.

Retail sale of raw milk is still legal in California, but the health department is insisting that Rawsome needs a retail food business license. The owner sent a written letter contesting that they are not a retail store, but he never heard a response until agents barged into Rawsome with guns years later.

What are your thoughts on this raid? How do you feel about raw dairy in general?