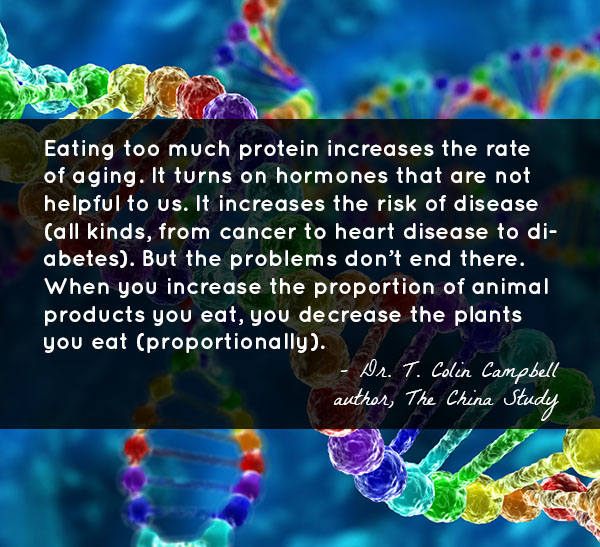 Proteins are the building blocks of life. They’re important for building muscle, helping our body repair injuries, and for basic functioning of our organs. But is there such a thing as eating too much protein?

More from Dr. Campbell’s talk: The China Study Author on Why People are Confused About Nutrition, Protein and Cancer: The Facts We Can’t Ignore

A growing body of science seems to indicate that not only is there such a thing as too much protein, but that the health effects are showing up everywhere – from cancer to heart disease to diabetes to obesity and much more.

Dr. T. Colin Campbell is author of The China Study, a book covering 30 years of research conducted with well over a million people. Dr. Campbell recently spoke to a packed house as guest speaker of the Vegetarian Society of Hawaii‘s monthly lecture. He spoke quite a bit about why the United States spends so much on health care (more than any other nation on a per capita basis), uses so many pharmaceutical drugs (about double most other developed nations, per capita), and yet has so many chronic health problems. The answer was quite clearly that we simply don’t understand nutrition.

As part of his talk, Dr. Campbell suggested that the scientific evidence is abundantly clear that we are eating too much protein, and that, in general, “Protein consumption is overemphasized,” he said.

How much is too much protein?

Ever look at a nutrition label and see that the granola bar you’re eating has 12% of your daily recommended daily allowance (RDA) for sodium? Food labels are required to show your RDA for sodium, calcium, Vitamin A….a whole slew of nutrients. But not for protein. So, how can we know whether we are eating too much or just enough?

Add to that bizarrely written information even on government webpages like the Centers for Disease Control, which states that we need anywhere from 10-35% of our calories from protein. Given that that could mean anywhere from 200 protein calories to 700, that’s a really wide range. Especially considering how incredibly specific they are about other nutrients.

With so much confusing information, people understandably tend to err on the side of caution by eating more protein than they need. And if they’re parents and they’re anything like my mom was, they make sure their kids get two to three times the protein suggested. The thinking is that ‘if a little is good…a lot must be MUCH better!’

The Physicians Committee for Responsible Medicine says that protein recommendations are about .36 x your weight (in pounds), and they add that there’s a significant margin of safety already built into this equation. Dr. Campbell explained it this way:

“We need protein. It’s a vital nutrient…to a certain level. How much protein do we actually need, anyway? Well let me tell you what the data really shows. The minimum protein needed by humans is about 6-7%. This study was done on people, young men, actually. The problem is that the RDA adds 2 standard deviations to the average needs. So the RDA says we need just about 10%. However, our average protein intake is 18%!!  Plant-based foods will get you 10%-15% with no real focused effort to do so. This destroys the myth that we need animal proteins.”

What’s wrong with too much protein?

A growing body of evidence is clearly showing that diets that consistently contain too much protein are bad for our bodies in many ways, and lead to many diseases.

Campbell explained it this way:

“Eating too much protein increases the rate of aging. It turns on hormones that are not helpful to us. It increases the risk of disease (all kinds—from cancer to heart disease to diabetes). But the problems don’t end there—when you increase the proportion of animal products you eat, you decrease the plants you eat (proportionally).”

And that means fewer antioxidants (only in plants), fewer complex carbs (only in plants), and fewer vitamins (virtually none in animal products). When we eat too much protein, there is less room in our diets for other foods. We can only eat so much food.

“And this study was from 1926!” he exclaimed. He suggested that this research on the effects of too much protein, and much other research like it, has been ignored. Doctors, instead, are taught to tell people to cut their fat intake, “which is a mixed bag at best,” Campbell said.