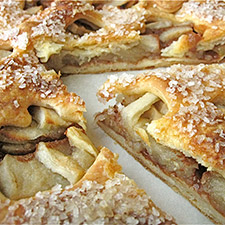 King Arthur Flour, America’s oldest flour company, whipped up an awesome looking apple pie during their first live stream baking demonstration this past weekend. The livestream demos are the latest addition to King Arthur’s educational offering which include a stellar website with more than 2,000 tested recipes, free traveling baking demos and hands-on classes.

“For more than three decades, we’ve offered our Traveling Baking Demos in cities nationwide every fall and winter. Over the years we’ve visited anywhere from 12 to 20 cities annually – but obviously that leaves many, many cities that we don’t get to each year. At the same time, since 2000, we’ve offered hands-on classes at our Baking Education Center in Norwich, Vermont. But, again, that’s not something everyone has the opportunity to take advantage of.  And so for years – and especially since we’ve been more active in social media and promoting these educational opportunities there – we’ve received requests from customers to offer demos online that would allow more people to attend.”

The live streamed demo featured “tips and tricks” for home baking to which you might not otherwise be privy. Not only is King Arthur flour of the highest quality (my husband won’t make popovers with any other flour), but it is a great employee-owned company out of Vermont that has won numerous workplace and product awards. A founding B-Corporation, they are committed to environment, employees, products, and community so you can feel good about not only about how good your baked will taste but also where you are spending your big green purse dollars.  And, providing virtual demonstrations is a great way to eliminate the carbon output that would have resulted from all those bakers traveling to an on-site demo.

The two-hour demo has many interesting tips and hints that if you’re interested in baking are well worth your time. But, if you don’t have time for the full two-hour demo, here is the recipe for …

*Substitute 1/2 cup granulated sugar and 2 teaspoons ground cinnamon for the Baker’s Cinnamon Filling and water, if desired. If you use sugar and cinnamon, DO NOT ADD THE WATER.