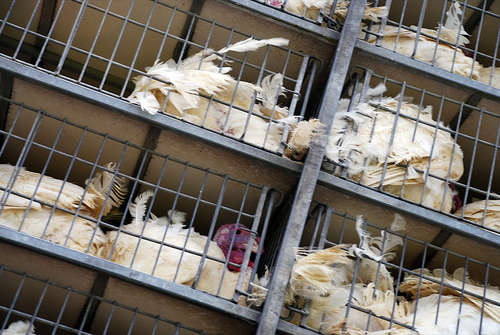 Antibiotics are ubiquitous in factory farming. Thanks to incredibly confined cages and horrific living conditions, animals in factory farms are more prone to infection. On top of that, factory farming facilities often pump animals full of antibiotics because this practice makes them grow larger. Chickens are no exception when it comes to overuse of antibiotics, and new research shows a link between antibiotics in chicken and the superbugs causing bladder infections in humans that are becoming more and more difficult to treat.

Chicken, Superbugs, and You

Amee Mangus, epidemiologist at McGill University, found that the E.Coli responsible for bladder infections closely matches the bacteria found in retail chicken — and those bacteria have a high level of resistance. “We’re particularly interested in chickens,” she said. “They in many cases are getting drugs from the time that they were in an egg all the way up to the time that they are slaughtered.”

The resistant bacteria that they’re talking about are also known as “superbugs,” and as antibiotic abuse continues, factory farms are contributing to this problem. If we can’t treat infections with antibiotics, we are in some serious trouble from a public health standpoint.

Breeding superbugs isn’t the only problem with antibiotic abuse on factory farms. Researchers warn that infected chicken can transmit E.coli to women who eat it, causing them to develop resistant bladder infections.  They estimate that over 8 million women are at risk for developing antibiotic resistant bladder infections. Chicken industry spokespeople say that this link isn’t definite.

If you want to watch the ABC news report on this issue, you can check it out below:

If you don’t want to serve up superbugs with your next meal, there are a couple of ways that you can opt out of factory farmed meat: