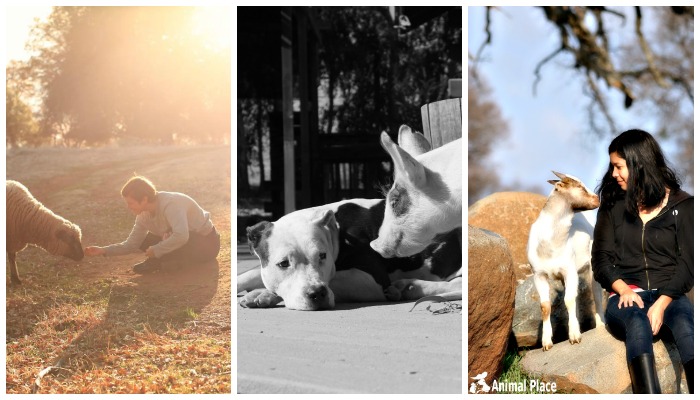 If you’re a fan of Eat Drink Better, more than likely you’re not only a foodie but an animal lover, too. That describes most of us at Animal Place, one of the nation’s largest and oldest sanctuaries for farmed animals. We like to eat good vegan food, hang out with the resident animals, and of course work diligently to protect them from cruelty and neglect.

The first animal we rescued was Zelda, a little piglet saved by a humane society that refused to let her go to any home wanting to eat her. In that same year, this shelter also served ham at an event fundraising for the dog kennels. That was 25 years ago and times have changed! Animal Place now operates a 60-acre Rescue Ranch in Vacaville and a 600-acre sanctuary in Grass Valley, California, where we educate the public about farmed animal issues, undertake vital legislation, and help to place thousands of rescued animals in forever homes. And we’re happy to report that the humane society that rescued Zelda now has an animal-friendly menu policy! Work still needs to be done, however, which is why we launched our Food for Thought campaign.

Campaigning to get farm animals off the menus at fundraising events for animal shelters and rescue groups is at the heart of Food for Thought. In a recent survey, we found that, in addition to dogs and cats, 29% of animal shelters also accept and re-home chickens, turkeys and other farmed birds. Even more organizations also take in rabbits, goats, pigs, and/or other species of farmed animals. Now, does it make sense to serve these animals at a BBQ event in order to raise funds to save more animals? We think not…and we’re not the only ones. A prior poll showed that an overwhelming majority of people believe it is ethically inconsistent for an animal shelter that rescues dogs, cats, rabbits, horses, goats, and other animals to sell or serve animal products at the shelter-sponsored fundraising events.

Food for Thought encourages and helps shelters adopt an animal-friendly (or plant-based) menu policy for their sponsored events. We need your help to work with these organizations and get them to see reason. And guess what? It’s not as hard as you think.

To learn more about the Food for Thought campaign, see the survey results, and access tips and resources on how to work with your local shelter, visit the Food For Thought website or email foodforthought@animalplace.org.