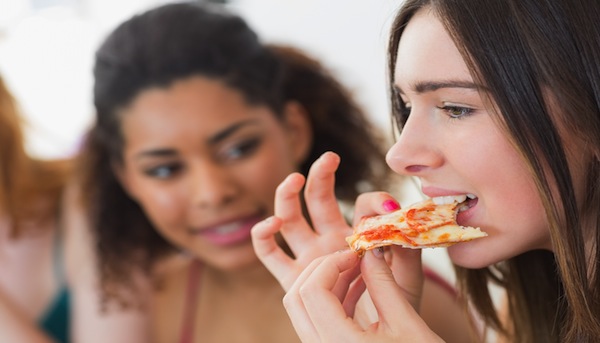 While we’ve shifted away from the milk-drinking culture we were as recent as the 1970s—even despite best efforts by the ‘Got Milk’ campaign—our cheese intake has skyrocketed. In the past forty years, we’ve decreased our milk consumption by 30 percent, but cheese consumption has increased more than 177 percent.

That’s a lot of cheese.

Even with a national focus on healthier eating, cheese seems to be the exception to the rule—we stuff it deep into pizza crusts perhaps in efforts to hide our obsession—but elsewhere we flaunt our cheese consumption like rites of passage. We graduate from cheddar to Gorgonzola, from mozzarella to burrata. We eat goat and sheep cheese on salads and pizzas as if to say

but this cheese is healthy.

For the most part, though, cheese is not healthy. It’s a source of saturated fats that most often come from dairy cows fed diets high in antibiotics, genetically modified grains and growth hormones. What’s worse, the milk drinking with dinner we so eschew at the modern dinner table is, ethically speaking, less problematic for the cows forced into our food chain. And with so many nondairy ethical cheese options out there that taste just as delicious, why is it we still increase our cheese consumption?

Meanwhile, food allergies—including dairy allergies—are on the rise, particularly among children. And at least one expert speculates that a hormone in cow’s milk intended to lure her baby calf to her teat is, in essence, an opiate that concentrates in cheese. It’s why the lone vegan at the dinner table often hears

I’d go vegan, but I could never give up cheese!

As it turns out, cheese may be addictive. But you probably already knew that. It’s a mammalian trait as VegSource reports:

What are these opiates doing there, hidden in milk proteins? It appears that the opiates from mother’s milk produce a calming effect on the infant and, in fact, may be responsible for a good measure of the mother-infant bond. No, it’s not all lullabies and cooing. Psychological bonds always have a physical underpinning. Like it or not, mother’s milk has a drug-like effect on the baby’s brain that ensures that the baby will bond with Mom and continue to nurse and get the nutrients all babies need. Like heroin or codeine, casomorphins slow intestinal movements and have a decided antidiarrheal effect. The opiate effect may be why adults often find that cheese can be constipating, just as opiate painkillers are.

And as our cheese obsession grows, according to CountingAnimals.com, Americans now consume almost twice as much cow’s milk as cheese than as fluid milk. That means more animals artificially impregnated, tethered to machines and forced to produce more milk to meet the demand for cheese. And USDA data reports that  it takes a lot more fluid milk to make cheese than it does to fill a gallon jug. So, while fluid milk consumption has significantly declined, the dairy industry found another way for Americans to consume it. They just hid it in your pizza crusts.