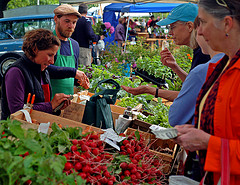 In my last post, I wrote about Nathan McClintock‘s research on the potential of alternative food to enhance social justice in economically impoverished neighborhoods.

Here, I present a different perspective.

Julie Guthman, a sociology professor at UC-Santa Cruz, thinks that alternative food activism has a tendency to reflect white desires more than the needs of the communities these programs supposedly serve.

Guthman’s surveys of UC-Santa Cruz undergraduates who do six-month field studies with alternative food organizations as well as the managers of California farmers markets and CSAs demonstrate that alternative food is burdened by white rhetoric.

According to Guthman’s research, alternative food’s rhetoric of “getting your hands dirty” is based on a presumption of a universal desire to connect with the land. Alternative food’s appeal to agrarianism is based on a history where the federal government gave land to whites while denying access to groups such as African Americans.

Guthman’s research also shows that the “Know your farmer, know your food” initiative of many alternative food projects does not resonate with food desert residents because of a historical memory of being exploited by local food purveyors.

She suggests that the very idea of alternatives can be uncomfortable for certain groups. Many alternative food projects are surrounded by a countercultural mystique that reinforces a sense of exclusion. The missionary zeal with which alternative food activists try to convert people to their particular way of eating can heighten discomfort.

According to Guthman’s research, even the term “food desert” reflects a kind of white self-righteousness. One of her studies suggests that the term is burdened by colonial imagery reminiscent of “the dark continent.” This type of discourse might further isolate people from the very alternative food projects trying to promote food justice in their communities.

These cultural disparities explain Guthman’s finding that food desert residents often say that they would rather have a supermarket in their community instead of urban agriculture, farmers markets, or community-supported agriculture.

Her research makes me question whether the alternative food movement might be focusing too much on food and not enough on structural inequalities that create food deserts in the first place.

(Image courtesy of Corey Templeton under a Creative Commons license.)