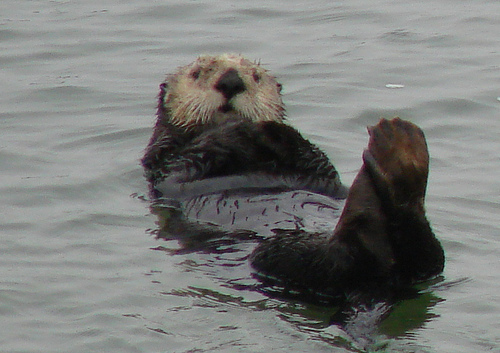 What do dogs in Ohio and sea otters in California have in common? Death by liver failure as a result of algal blooms.

In Ohio this year (and in many previous years), a cyanobacteria bloom at Grand Lake St. Marys is killing animals that come in contact with the water. More than fifteen people have reported stomachaches, dizziness, and numbness after touching the water in the lake. Several dogs have died.

Grand Lake St. Marys has been closed for swimming, fishing, and boating. Fish kills are a regular sight. Tourism around the lake – normally a $160 million business – is nonexistent. Local residents say they have seen dogs die shortly after taking a drink from the lake.

Dan Jenkins’ dog, a black lab, died after a quick dip in the Grand Lake St. Marys. Jenkins said his dog ran into the water and back out and was covered in bright green slime. Jenkins wiped the slime off his dog and took him home to bathe him.

The dog later died and Jenkins spent four days in the hospital after he had difficulty seeing and walking and his legs and arms went numb. Weeks later, he still had problems with memory loss and fatigue.  Doctors say it’s because of the toxins from the algal bloom.

What Is an Algal Bloom?

An algal bloom occurs whenever an excess of nutrients enters a water system and the algae reproduce quickly. Algal blooms can be many colors – blue green algae (cyanobacteria) produce bright green blooms, mostly in freshwater systems; golden algae produce bright yellow blooms, again mostly in freshwater systems; red algae produce “red tides”, which are not associated with tides and occur mainly in marine systems. There is still some debate over exactly what causes red tides, but we know cyanobacteria blossom wherever there is significant agricultural runoff.

When an algae produces toxins, the bloom is known as a harmful algal bloom (HAB). State parks, wildlife, or fisheries departments are often the ones charged with monitoring HABs and making decisions about when to close lakes and other waterways. Even if an algal bloom does not qualify as an HAB, it can still kill fish and other aquatic organisms by using up all the oxygen in the water.

The different toxins have different effects on people and animals. Effects range from rash and itching, to vomiting and dizziness, to liver and nerve damage. Animals have died and people have become severely ill just from coming in contact with the water containing cyanobacteria toxins.

Continue reading on page 2 about HABs in lakes, rivers, and the ocean, and what’s killing the sea otters.